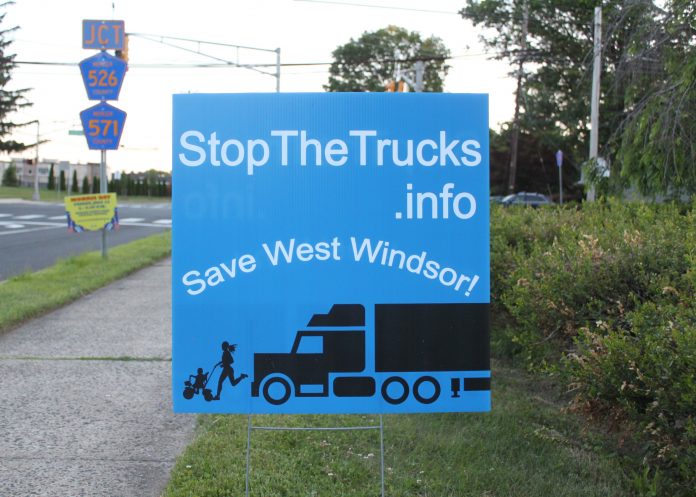 The meeting, which starts at 7 p.m. on June 29, will be held in the West Windsor Township Senior Center at 271 Clarksville Road. It is the fifth one in a string of meetings on the application on the West Windsor/Lawrence border.

There will be no further public comment on the application. The meeting is intended for deliberation and action by the board.

The application – a proposed 5.5 million-square-foot warehouse – has drawn strong opposition from many West Windsor residents, who voiced their disapproval at the Planning Board’s June 1 meeting.

More than 100 people attended the meeting and the board listened to more than four hours of public comment.

Opponents expressed concern that tractor-trailer trucks would use Clarksville Road to reach the Princeton-Hightstown Road/Route 571 to get to the New Jersey Turnpike in East Windsor.

Bridge Point West Windsor (WW) LLC is seeking preliminary and final major site plan approval and subdivision approval for the 645-acre parcel, which is the site of the former American Cyanamid property in West Windsor.

The warehouse distribution center would be developed in two phases. Plans for the first phase call for subdividing 539 acres from the overall parcel, and the construction of several warehouses.

Three warehouses, totaling three million square feet, would be built in the first phase. Combined, there would be 461 loading docks and 507 trailer parking spaces. Parking is proposed for 1,127 vehicles.

The second phase of the development would consist of four warehouses totaling 2.5 million square feet. There would be 449 loading docks and 564 trailer parking spaces. There would be parking for 1,074 vehicles.

The applicant would have to return to the Planning Board for final approval for phase two.

A new road would be built through the property, beginning at Quakerbridge Road opposite Avalon Way in Lawrence. It would end at Route 1, opposite the Nassau Park Pavilion shopping center in West Windsor.