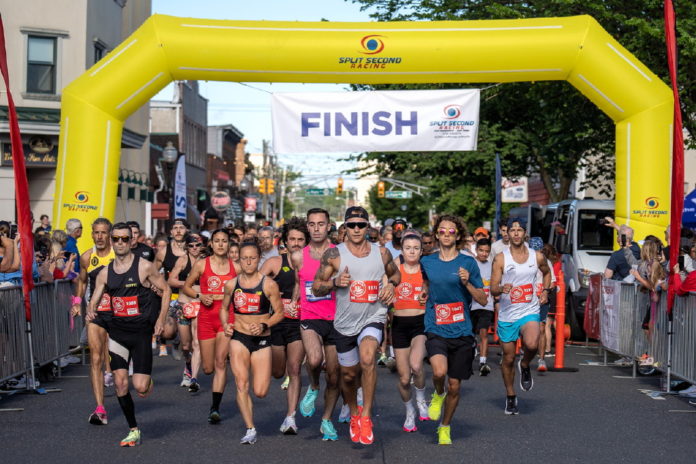 RED BANK – For the first time since 2019, more than 1,400 runners and walkers returned to the heart of Red Bank for the Red Bank Classic 5K and Kids Fun Run to benefit youth programs at the local YMCA.

After being sidelined for two years by the coronavirus pandemic, the charity event stepped off at 8:30 a.m. June 18 on Monmouth Street, drawing spirited runners and walkers of all ages – from the Boondocks Fishery team members wearing red tutus and handing out lobster-shaped candy along the route, to Claire Arno, 78, who was walking in memory of her 11-year-old grandson, Luca Iacono, who passed away from cancer in 2019, according to a press release.

Mayor Pasquale Menna welcomed the crowd of 1,420 runners and walkers, many who waited three years for the 3.1-mile trek through downtown Red Bank and its tree-lined neighborhoods.

“It was pure joy to bring the community together again,” said Angela Courtney, owner of Sweetest Sin Boutique, White Street, and one of the founders of the charity run/walk, which was established by a group of health-minded business owners in 2018, according to the press release.

Organized and hosted by the Red Bank Business Alliance and Red Bank RiverCenter, the 5K was presented by co-sponsors Boondocks Fishery and the Grunin Foundation, with support from more than 50 local businesses and scores of volunteers, Courtney said.

“This was one of Red Bank’s biggest outdoor events to make a comeback after COVID-19 halted large gatherings,” said Jamie Edelbach, marketing manager for Red Bank RiverCenter and one of the event coordinators.

“We are so grateful for the tremendous support from our local business community, all the walkers and runners, and the event committee. It truly was a classic comeback,” Edelbach said.

Following the 5K race and the kids run, runners, walkers and spectators enjoyed live music from the Victoria Taylor Band and an after-party hosted by Red Tank Brewing Company.

A portion of the event proceeds will support programs at the Red Bank Family YMCA to help local children recover from impacts of the pandemic and to underwrite free swim lessons for Red Bank third-graders, Courtney said.

“After everything our kids have been through, we are thankful this community event will have a lasting impact,” she said.

Event organizers were pleased with the cool, breezy weather and so were the runners. The male and female winners set new course records for the challenging course, which was certified by USA Track and Field.

In the women’s 5K, Shannon McCarthy, 28, of Hoboken, won the race in a record-breaking time of 17:34. McCarthy, a former Rumson-Fair Haven Regional High School student, was eighth overall.