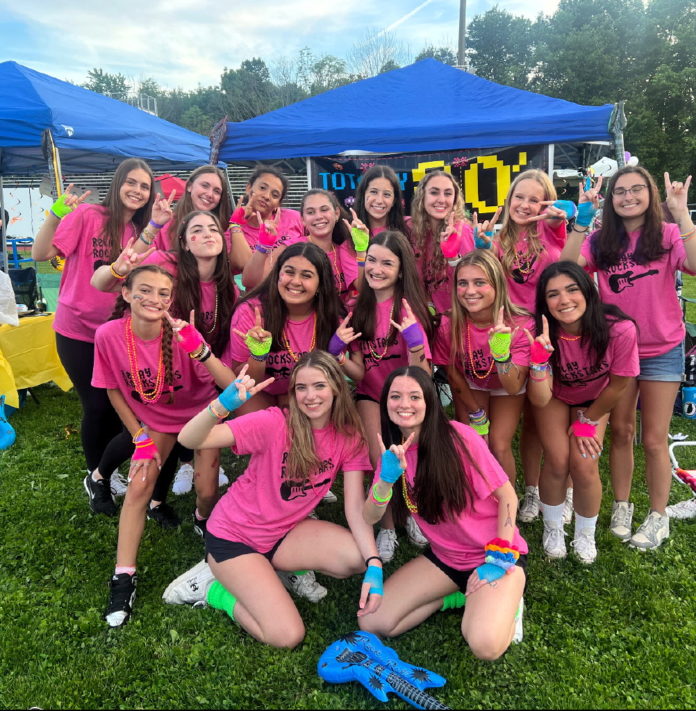 FREEHOLD TOWNSHIP — Teams made up of people of all ages came together to raise $69,859 for the American Cancer Society during a recent Relay For Life event held at Freehold Township High School.

For several months before the June 3 event, the individuals met to come up with names for their teams and to start raising money for the cause. Through social media posts and fundraisers, the participants raised money prior to the event that was held outdoors at the high school.

On the night of the event, all of the teams gathered for a 12-hour night that would include games and bonding activities. “The Star-Spangled Banner” was sung by Marisa Celano, 18, of Freehold, prior to the opening ceremonies.

Gianna Dembski, 18, and Caroline Speck, 18, both of Freehold, were part of the leadership team for Relay For Life. Both young women spoke during the opening ceremonies to share what the event was about and how it has changed the lives of many people.

Relay For Life starts as sunset begins to symbolize the start of the fight and the darkness one will endure during their battle with the disease.

“Once it turns to midnight, when everyone is tired, that is supposed to symbolize how the cancer patients feel going through their treatments. Once the sun comes up, it symbolizes those who have survived and that their darkness is coming to an end,” Gianna and Caroline explained.

While some people who joined the event as volunteers or participants were present to raise money to benefit others and to be part of a good cause, many of the volunteers and some members of the leadership team have a close relationship to cancer and how it affects other individuals.

Caroline, who watched her aunt battle thyroid cancer, saw it was a difficult fight and said she never wants to see someone suffer like that again.

Being the social media lead for the event helped Caroline to share her awareness of the disease with others and to explain how they can help people who are battling cancer.

Kevin Clarksman, who is an 11-year survivor of prostate cancer, joined Gianna and Caroline on stage to share his story.

“I have been volunteering since the late 1990s and I always enjoy it because this is such a wonderful cause. We have to remember to celebrate, remember and fight back,” Clarksman added.

Throughout the night there were many events that helped to keep the participants going.

One volunteer, Isabella Federico, 14, said she was “excited for the dance battle. I am a dancer so I know I will enjoy it, but I am also looking forward to a lot more because it is my first year.”

Many Freehold Township High School teachers participated in the Relay For Life.

Sean Leahy, who has been a criminology and peer leader teacher at the high school for more than 14 years, began working with the Relay For Life club about 12 years ago. He praised the students who worked diligently to make the event the success it turned out to be.

Individuals who survived a battle with cancer walked a Survivor Lap around the track to commemorate their years of determination and bravery during their fight with the disease. The survivors’ caretakers and family members joined them to help mark the occasion.

A Luminaria Lap honored individuals who had lost their battle with the disease.

As the event was coming to an end, the volunteers were tired, but rewarded, and they walked a lap around the track to remember people who are battling cancer now and those who fought the disease in the past.

Many of the participants said they will continue to support Relay For Life to help raise money for the American Cancer Society until cures for cancer are discovered.