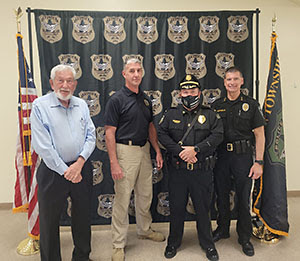 Nathan Roohr was appointed and sworn in as captain of the Bordentown Township Police Department.

Roohr has been with the department since 2003 and previously served as patrolman, patrol sergeant and more recently lieutenant. In Dec. 2021, Roohr received a Distinguished Service Award from the New Jersey Bias Crimes Association for the character, integrity and courage that he showed in holding other law enforcement officers accountable, according to the Bordentown newsletter.

In other police news, the department welcomed Police K-9 Remi. Remi is a 16-month-old black and white German Shorthair Pointer who is being handled by Ptl. Keith Alexander. Remi and Alexander graduated from the New Jersey State Police Scent Detection Class on June 11, and Remi will serve as a single-purpose narcotics scent dog, according to the newsletter.

The Township Committee also approved the renewal of two agreements with the Bordentown Regional School District. The first was renewing the Student Resource Officer for the 2022-2023 school year, and the second agreement was the continuation of Officer Matt Crowell’s position as the Class Three Special Law Enforcement, according to the newsletter.