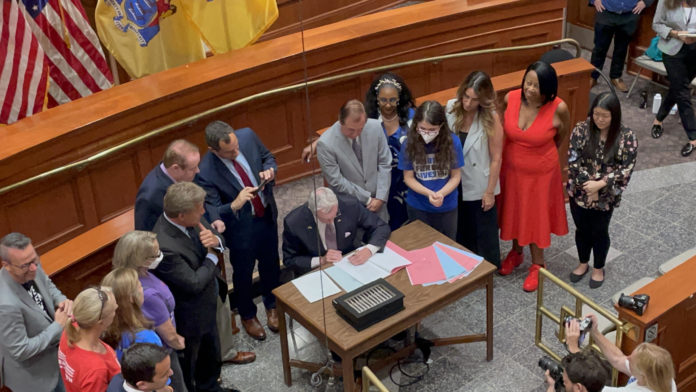 METUCHEN – New Jersey has one of the strictest gun laws in the country, but that does not mean the state is immune to gun violence.

On June 30, nine people were shot in broad daylight outside a bodega in Newark, Essex County. In April, a nine-year-old girl was shot and killed doing what nine-year-old children do, playing hide and seek in the courtyard of her apartment complex in Trenton, Mercer County. In January, an 18-year-old honor student was shot and killed while unloading groceries for his grandmother in Paterson, Passaic County.

“This is the reality in communities across our state,” Platkin said.

Gov. Phil Murphy signed a sweeping series of gun safety reforms, which were announced in April 2021, to continue the fight against gun violence in New Jersey in front of his colleagues including Lt. Gov. Sheila Oliver, who serves as commissioner of the Department of Community Affairs, Col. Patrick J. Callahan, superintendent of the New Jersey State Police, Assembly Speaker Craig Coughlin (D-19), State Sen. Majority Leader M. Teresa Ruiz (D-29), other local officials, and advocacy groups including March For Our Lives and Moms Demand Action.

Murphy said on the reform journey, they were met with critics calling their efforts “too ambitious” against a “strong” gun lobby.

However, the signing of the gun safety reforms show critics, “we can take on the epidemic of gun violence and win” and “put in place strong and smart gun safety laws that are consistent with the Second Amendment [while] still protect our communities,” he said.

The mass shooting in Highland Park, Ill. during a Fourth of July parade was heavy on the minds of the officials who attended the press conference, along with the May mass shootings at Robb Elementary School in Uvalde, Texas, where 19 students and two teachers were killed, and a grocery store in Buffalo, N.Y., where 10 people were killed.

In Highland Park, Ill., a 21-year-old man was charged in connection with the shooting, which killed seven people and wounded dozens of people, according to reports.

“We’re dealing with 10 mass shootings a week,” Platkin said, noting he grew up during the Columbine generation. “When Columbine happened, I thought we were going to figure it out. I really didn’t think we’d still be here.”

In 1999, two seniors at Columbine High School in Littleton, Colo. killed 12 of their peers and one teacher.

Platkin along with other officials praised Raisa Rubin-Stankiewicz, state policy associate with March For Our Lives, for her steadfast “bravery, confidence and advocacy.”

“There are no students anywhere in the world other than America that have to do what you are doing,” he said.

Rubin-Stankiewicz is a junior in college.

“Not often do you come to a gun violence event and feel a source of hope,” she said. “It only unfortunately comes during the year where we have had more mass shootings than days.”

Rubin-Stankiewicz called the gun law package a common sense set of laws, which are “so necessary” that will help fill “state loopholes” and fill “federal loopholes at the state level.”

On the federal level, Platkin said members of the U.S. Supreme Court have embraced “a far-right wing approach to the Constitution that is enabling unfathomable access to guns across the country.”

“I find it hard to believe that the court has said they give more deference to people who want unlimited access to guns than they do to law enforcement officers who are dealing with this crisis,” he said. “Or they care more about dictating reproductive health decisions than they do about protecting kids. It’s a definition of pro-life that I will never understand.”

Platkin’s comments received a round of applause from those at the press conference.

State Sen. Joe Cryan (D-20), who is the former Union County Sheriff, said the cries of a mother who realizes her son will never come home, the sobs of siblings crying uncontrollably and the cries of children, who realize their parents are gone, will never leave the most hardened men and women in the law enforcement profession.

“I’ve seen [law enforcement officers] stand there and not know what to do next … that feeling of absolute hopelessness,” he said. “Sometimes they shrug their shoulders … [these are] folks with weeks of training and years of experience, [they] stand [there] and say, ‘What can you do?’”

When he was on the job, Cryan said he’d refer the officers on those crime scenes to counseling.

“I’ve seen that, and I’ve stood there with the hopelessness. Today we have hope. Today, I can look at somebody and [answer], ‘What can you do?’ We’ve done something, we’ve actually done something today.”

A1765/S1893 – Allows AG to bring cause of action for certain public nuisance violations arising from sale or marketing of firearms.

Rubin-Stankiewicz said she is “so grateful to live in a state where the governor and legislature are willing to take action to save lives, to make our communities safer, end gun violence in our communities and to hold the gun industry accountable.”

“New Jersey is serving as an urgently needed model for the rest of the country with this gun safety package 3.0,” she said.

Ruiz, who grew up in Newark and knows the difference between the sound of a firework and a gunshot, said the state is making investments in human capital prevention with the gun safety laws.

As the applause and headlines dimmer down from the press conference, Ruiz said she hopes her colleagues will continue “uncomfortable conversations.”

“We must go back to work to make investments in human capital that creates prevention and systems that elevate every single community despite what kind of New Jerseyan you consider yourself to be,” she said.

Rubin-Stankiewicz noted that “continued work” includes more lifesaving measures; the establishment of standards for safe gun storage; and the continued advocacy to raise the minimum age to 21 to own shotguns.

Platkin said he “can’t wait” to use the “common sense” gun reform laws.

“There is no one way to solve gun violence,” he said. “[What can be done is] enforcement, holding those accountable who are profiting from bloodshed and investing in communities so we can disrupt the cycle of violence.”