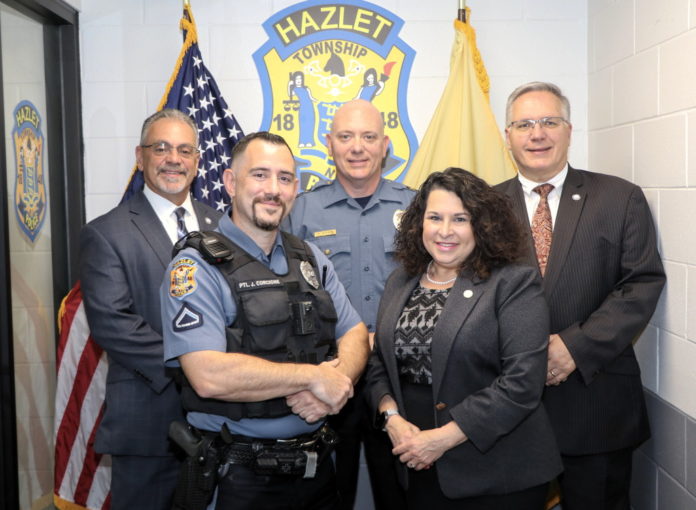 “You’ve got to let me help you” were some of the first words a Hazlet police officer used to help a suicidal individual in crisis.

On June 29 at 8:58 a.m., the Hazlet Police Department received a 911 call regarding a person in crisis. The person was in their vehicle threatening to harm themself and responding officers in the parking lot of a local business.

The individual told dispatchers they did not want police to respond to the area, according to a press release from the prosecutor’s office.

Hazlet Police Department Patrolman John Corcione was one of the officers who responded to the call for assistance. Corcione had attended a CIT session at the prosecutor’s office in May.

Upon arrival at the scene, Corcione began a dialogue with the person who was sitting in their vehicle and holding a weapon. Corcione used skills he learned in the training class to de-escalate the situation, according to the press release.

The officer told the individual about CIT and explained he was trained to respond to critical incidents to get people to “even better hands” to help.

Corcione successfully convinced the person to drop the weapon and assisted them in calming down until emergency medical services personnel arrived, according to the press release.

“Officer Corcione did exactly what he was trained to do and his actions in this crisis situation are an incredible real world example of CIT making a difference in the field,” Linskey said.

“I would like to recognize and thank Officer Corcione, Hazlet Police Chief Ted Wittke for his strong support of CIT and the other officers and EMS personnel who assisted in this incident.

“The compassion and heart this officer provided to this individual in need saved a life and we are hopeful the person in crisis is getting the compassionate care they need,” Linskey said.

“It is evident by the actions of Officer Corcione that CIT works by giving officers the skills to effectively diffuse these high stress incidents. He did a great job and we are all very proud of him,” Wittke said.

Corcione said, “Thankfully, this individual and I crossed paths at exactly the right time. Maybe we ended up exactly where we were supposed to be that day, so the individual could get the help that was desperately needed. We just did our job, which is to make sure everyone goes home.”

The prosecutor’s office next CIT class will be held in October. Each class trains about 25 police officers and five mental health professionals and includes an in-depth look at mental illness, behavioral health, developmental disabilities and their implications for a law enforcement response during a crisis, with a strong emphasis on de-escalation, according to the press release.

Law enforcement officers learn to apply the strategies they learn in the class during real life situations in order to minimize the potential for injury or violence.

Mental health and behavioral health practitioners sit in as students in the class to build relationships with the police officers and to better understand the issues the officers face while often serving as the initial responders to such calls for service, according to the press release.