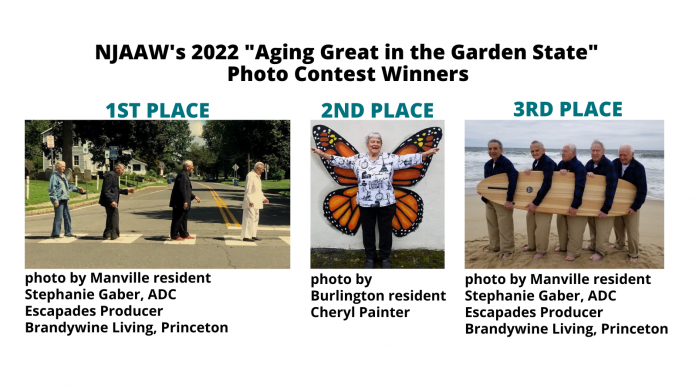 For her winning shots, Stephanie Gaber, of Manville, recreated two iconic shots with her residents.

“In a discussion group, we were talking about the British Invasion that was a cultural phenomenon of the 1960s,” Gaber said in a press release through New Jersey Advocates for Aging Well (NJAAW) on July 8. “Residents talked about how they remembered all the hype when the Beatles came to America. We discussed their iconic album cover, ‘Abbey Road,’ and I said, ‘Let’s recreate the photo for fun’.”

In her third-place recreated photo, Gaber said it came out of a discussion on how husbands and wives met each other.

“Richard Snedeker said he met his wife in Sea Girt. She lived on New York Boulevard and used to love to surf. He said he called her ‘my little surfer girl.’ We then talked about the song by the Beach Boys, and they thought it would be fun to recreate the album cover,” she said.

Burlington resident Cheryl Painter, who is retired from Independent Living Concierge at the Masonic Village at Burlington, earned second place with a snapshot of her “spunky little thing” 94-year-old mother, according to the press release.

At just 4 feet 11 inches, Painter said her mom, Blanche Baldorassi, is “a free spirit, always up for adventure and loves to fly in planes, go to the beach and visit all our family in five different states.”

As an artist, Painter created the butterfly mural in her winning photo, which features her mother.

“My mother released one of my monarch butterflies a few years ago and was thrilled to experience it,” she said, noting she raises monarchs and has an official monarch waystation/habitat in her yard.

Painter said her mom is “staying active by playing Scrabble daily – no one beats her at Scrabble – and she is always trying new things.”

“At 90 years old, she parasailed in Lake Tahoe, her idea,” she said. “The woman doesn’t say no to any opportunity.”

NJAAW launched the photo contest seeking realistic images of adults aged 60 plus. They invited New Jersey’s amateur and professional photographers to celebrate aging well. Photos were judged by a panel of NJAAW staff and board members.

“The judges were impressed by all the submissions, but these three photos were particularly creative and evoked strong feelings of joy, past and present,” NJAAW’s Executive Director Cathy Rowe said.

Both winners received gift cards, had their photos on display at NJAAW’s recent 24th annual conference for aging services professions and they appear on NJAAW’s website at njaaw.org. Future use includes social media posts and promotional materials, according to the press release.

NJAAW, which formed in 1998, is the only statewide nonprofit focused solely on providing leadership in public policy and education to enable older adults to live with independence and dignity in their communities, according to its website.