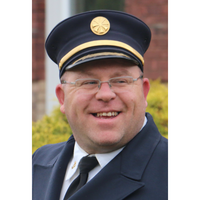 HELMETTA – With a heavy heart, the close-knit community of Helmetta will say ‘goodbye’ to their fire chief.

“The community is certainly saddened by the news of the sudden passing of Chief [Christopher] Acs,” said Mayor Christopher Slavicek. “He has been a dedicated member of the Helmetta Volunteer Fire Department for over two decades. His service to our community and others is simply admirable. Sympathy and support to his family, friends and fellow members of the Helmetta Fire Department and surrounding agencies. Our close-knit community mourns with a heavy heart and memories of his contributions.”

A funeral procession will be held for Christopher Rudolph Acs on July 16 along Main Street near the Helmetta Fire Volunteer Department. Main Street will be shut down between 11:30 a.m. to 12:30 p.m., officials said.

On July 11, Acs, 47, of Jamesburg, succumbed to his injuries and was ultimately pronounced dead at the scene after his motorcycle was struck by a 2019 Honda Odyssey as he was traveling northbound on Georges Road in South Brunswick, according to a press release through the Middlesex County Prosecutor’s Office.

Authorities responded to the intersection of Georges Road and Summerfield Boulevard following the report of the crash at 3:21 p.m. July 11, according to a press release.

Acs was born in New Brunswick. He lived in Helmetta before moving to Jamesburg in 1998.

He was employed for the past five years as a mechanic at E. I. DuPont DeNemours & Company, Sayreville. Previously he was employed by George Logan Towing, North Brunswick, according to his obituary.

Acs enjoyed tinkering on anything to get it to work. He enjoyed model trains, quadding, dirt biking and loved his motorcycle, according to his obituary.

He was predeceased by his sister Karen Acs.

Surviving are his wife of 17 years Laura Rothrock, his son Ethan Christopher, his daughter Sophia Louise, his parents Rudolf and Debra (Nowak) Acs of Friedens, Pa.  and his two brothers Joseph and his wife Amy, of Helmetta, and Andrew and his wife Caryn, of Pittsburg, according to his obituary.

A funeral service will be held at 11 a.m. July 16 at the Lester Memorial Home, 16 W. Church St., Jamesburg. His cremation will be private.

In lieu of flowers, donations in the name of Acs may be made to St. Jude Children’s Research Hospital Foundation at www.stjude.org.

The investigation into the incident in South Brunswick is active and continuing. Anyone with information is asked to call Ptl. Jason Gassman of the South Brunswick Police Department at 732-329 4000 ext. 7432 or Detective Jonathan Berman of the Middlesex County Prosecutor’s Office at 732-745-4328.