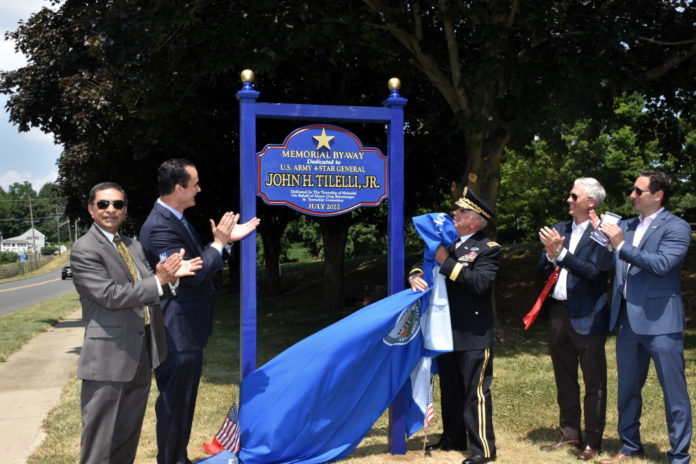 More than 100 Holmdel residents and veterans were on hand to mark the special occasion, according to a press release from the township.

Tilelli was raised on Crawfords Corner/Everett Road on a plot of land his family purchased in 1922.

He was commissioned an officer in the Army in 1963 upon graduation from Pennsylvania Military College (now Widener University).

Tilelli rose through the ranks and eventually attained the rank of four-star general. He served as Vice Chief of Staff of the Army.

In that role he was the second highest ranking active duty officer in the Army and he assisted the President of the United States, the Secretary of Defense and the Secretary of the Army with managing the day-to-day operations of the Army, according to the press release.

Tilelli also served as the Commanding General of the Army Command, or FORSCOM, with responsibility for approximately 87% of the Army’s combat force. He concluded his military career by serving as Commander-in-Chief of the United Nations Command in Korea.

“To say that Gen. Tilelli has led a life of extraordinary distinction would be an understatement,” Mayor Greg Buontempo said during his remarks at the ceremony. “Gen. Tilelli has made his hometown and his country extremely grateful and proud.”

When asked about growing up in Holmdel, Tilelli said, “The ideals and seeds of everything
you are, are where you came from. The fact is that American service members come from all over the United States of America and it is so important that we support them.”

At the conclusion of the ceremony, the members of the Township Committee unveiled a sign on Crawfords Corner Road which designates it as the “John H. Tilelli Jr. Byway.”

Joining municipal officials at the ceremony were Gen. Lisa Hou, the Adjutant General of the New Jersey National Guard and Commissioner of the New Jersey Department of Military and Veterans Affairs; Capt. Edward Callahan, commander of Naval Weapons Station Earle; and many Holmdel veterans, who participated in the township’s first Veterans Roundtable Discussion immediately prior to the ceremony, according to the press release.