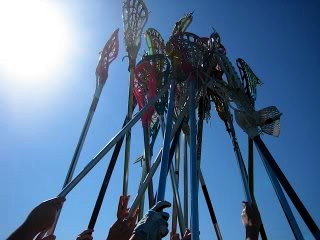 The arena in Trenton is one of eight current locations on the East Coast that will host a Professional Box Lacrosse Association (PBLA) team.

The PBLA is conducting a contest where people can nominate team names.

“The PBLA is thrilled to further support the number one growing sport over the last 15 years, by placing professional teams in lacrosse hotbeds across the Northeast and Mid-Atlantic,” PBLA CEO Carmen Kesner said.

The league was established to further grow lacrosse across the country and “create the most exciting brand of professional box lacrosse,” according to PBLA.

On Aug. 2, following the nominations currently taking place, fans will then vote on a team name from four nominations selected, according to the PBLA.

The name that receives the most fan votes will become the official name of the team and the fan who nominated the name receives a pair of season tickets.

According to the National Lacrosse League (NLL), league box lacrosse is played in the confines of an ice hockey rink with glass and rink boards. The playing surface is turf and combined teams average 25 goals during an NLL game.

Each game in the NLL consists of four 15-minute quarters and if there is a tie at the end of regulation the game is decided in a sudden-victory overtime.

The participation in lacrosse grew nearly 10% in 2017 and 25% since 2012, according to a 2018 Sport & Fitness Industry Association report in the New York Times.

At the time of the report, 1.1 million boys and girls played lacrosse in youth leagues.

“Based on our exhaustive research, we firmly believe these diverse markets are eager to experience the fastest, most physical and exciting brand of professional lacrosse ever played,” Kesner said. “Our objective is to continue to support this wave of lacrosse popularity through growth into other markets across the country.”

The league is weighing its options on additional markets and will announce those once additional teams and communities are brought on board, according to the PBLA.

To nominate a name for the Trenton team visit, www.PBLA.com.