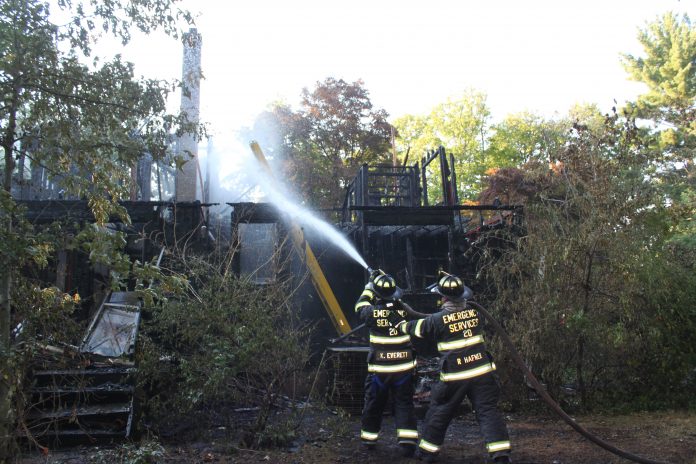 Homeowners of a Rosedale Road home have lost “everything we own” after a fire destroys their home.

The fire was reported at 4:37 p.m. by a neighbor on July 23, who told the dispatcher that smoke was coming from the house, according to the Lawrence Township Police Department.

When the first police officers arrived, they found heavy fire at the rear of the house, police said. The fire call was upgraded to involve fire departments from neighboring towns, in addition to the three Lawrence Township fire companies.

Homeowner Calavino Donati said she was at work when a neighbor called to tell her about the fire.

“I grabbed the car keys and drove home. When I got there, I saw a lot of fire trucks. The whole back of the house was in flames. I saw fire coming out of many windows,” Donati said.

“This is everything we own. All of our memories and mementoes from both sets of parents (were destroyed),” Donati said.

It took firefighters more than an hour to bring the blaze under control, police said. Crews of firefighters rotated in and out as they fought the fire in late afternoon temperatures that reached the mid-90s.

The Lawrenceville Fire Co. used its telesquirt fire truck to spray water on the flames from above, while firefighters on the ground used hoses to extinguish the fire, police said.

After the fire was extinguished, firefighters went inside the house and used tools to pull down the ceiling to look for hidden pockets of fire. Smoke continued to drift out of the burned-out house, police said.