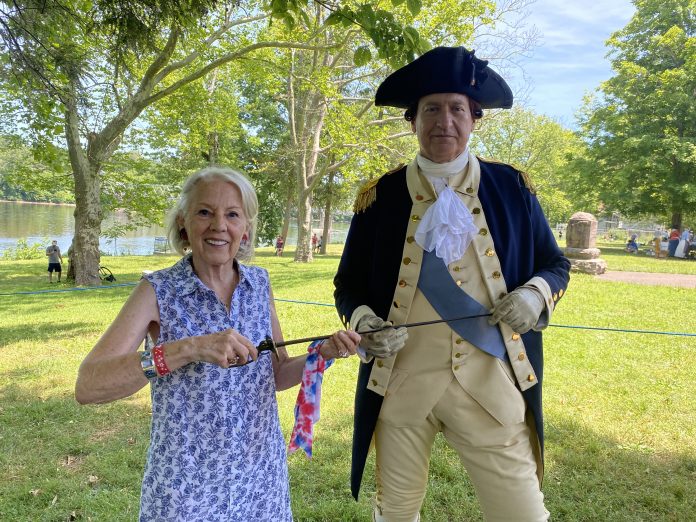 A Pennington woman and her sons presented a Revolutionary War era American small sword to the Friends of Washington Crossing Historic Park.

Named the “Thorndike sword,” the blade had been in the Thorndike family since war and dates to between 1730 and 1760.

Lisa Thorndike and her sons Alden and Michael had presented their family heirloom to the members of Friends of Washington Crossing Historic Park on July 4.

“We’re honored that the Thorndike family has chosen us to take possession of their family’s
heirloom for a future exhibit,” said John Godzieba in a press release through the Friends of Washington Crossing Historic Park.

Godzieba is president of the Friends of Washington Crossing Park and the reenactor who portrays General Washington.

“We also extend our gratitude to Lisa Thorndike for her continued support of our organization as a member and a donor,” he said.

The nonprofit Friends of Washington Crossing Historic Park shares the “powerful story of General George Washington’s daring crossing of the Delaware River on Christmas night 1776 and interprets its ongoing impact on world history for both today’s citizens and future generations,” according to its website.

Through fundraising and the generous support of donors and members, they are able to maintain and sustain the significant historic site and welcome thousands of schoolchildren, families, individuals and groups every year, according to its website.

Each December, thousands of people gather on the banks of the Delaware River to watch the reenactment of George Washington’s daring 1776 Christmas night river crossing. During the event, several hundred reenactors in Continental military dress listen to an inspiring speech by General Washington and then row across the river in replica Durham boats, according to its website.

Godzieba said, “It’s the continuing mission of the Friends of Washington Crossing Park to preserve and present Revolutionary War history to our visitors and guests.”

“Artifacts, such as this sword, are tangible connections to this country’s struggles during The Revolutionary War and conserving these valuable objects for future generations is an important responsibility,” he said.