Not in Our Town Princeton recognize students, educators with Unity Awards 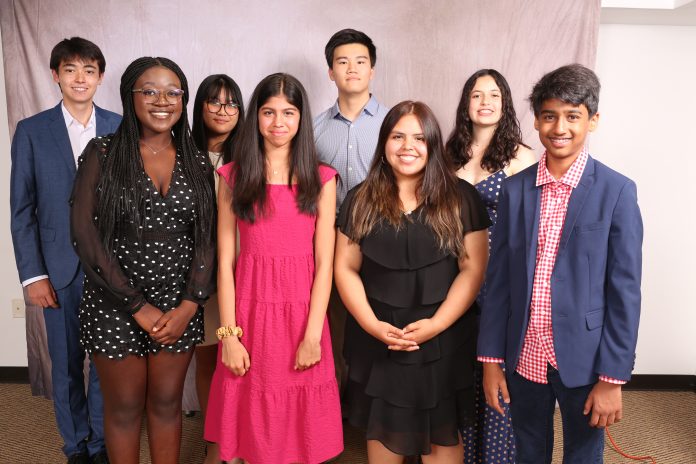 Not In Our Town Princeton recognized local middle, high school students and educators for their recent work on anti-racism.

The work ranged from hosting a “Day of Dialogue” featuring various ethnic groups and cultures at Princeton High School (PHS) to creating a series of podcasts interviewing African American staff at PHS, according to a press release through Not in Our Town Princeton.

Not in Our Town Princeton is a multi-racial, multi-faith group of individuals who stand together for racial justice and inclusive communities, according to its website.

The students and staff were awarded Unity Awards during the 25th Unity Awards celebration held at the Unitarian Universalist Congregation of Princeton in June.

The group honored six juniors and one senior from PHS and one eighth grader each from Princeton Middle School (PMS) and Princeton Charter School (PCS).

Not In Our Town recognized PHS teachers Dr. Joy Barnes Johnson and Patricia Manhart
with special Unity Awards for their creation of the Racial Literacy and Justice course at PHS.

The group also honored Shirley Satterfield, a former guidance counselor at PHS, who was instrumental in the implementation of the awards, choosing many of the recipients in the early years, according to the press release.

Attending the awards was Alison Welski, the first Unity Award recipient in 1998, who is now a public health professional at the Centers for Disease Control and Prevention (CDC).

“When I think of my hometown, I proudly think of the hope in Mrs. Satterfield’s eyes, who taught me that it’s through the love of each other that we find each other,” she said.

“The U.S. needs more citizens like these PHS Tigers whom we are recognizing this evening,” he said. “As principal, I feel these students embody what it means to ‘learn to live’ and ‘live to learn’ and why you’re helping make the world a better place one student at a time.”

Dafna Kendal, president of the Princeton Board of Education, said they are “so proud” of the student’s accomplishments.

“Thank you for all you do to make our school community and the larger Princeton Community more understanding and inclusive,” she said.

Some of the students shared their own personal stories.

Ida Sidik, a rising senior at PHS, recounted her experiences as a first-generation African American whose mother is from Ghana. When she moved to Princeton four years ago, she said she was worried that there were so few African Americans at PHS. She joined CARE in 2019 when students were taking classes from home during the pandemic.

“We’re so oblivious to the hate because it’s become so normalized,” she said.

Ngan Le, also a rising senior, told of her experiences as a first-generation immigrant from Vietnam.

“I moved here when I was very young. A lot of the experiences I had with equity was seeing microaggressions [when] trying to learn a new language. I understand what it’s like to sit on the sidelines and watch those around me struggle. I made a vow at the age of 7 not to allow that to happen to my peers and if something happens speak for them,” she said.

Jamin Nuland, rising PHS senior, described his experiences having lived mostly in Shanghai,
China and who is “half Jewish and half Buddhist” and “half Chinese and half American.”

He joined Latinos Unidos at his high school out of curiosity about Latino culture and quickly became involved in efforts to support the group and advocate for English as a second language (ESL) students.

The students who received the Unity Awards included:

Vihaan Jain, a recent eighth grader at Princeton Middle School (PMS), is a student leader for the Asian American Pacific islander (AAPI) Club at PMS, which he founded and helped develop. The group discussed various issues affecting Asian Americans and promoted social justice issues and inclusivity at the middle school.

Ngan Le, a rising senior at PHS, is the co-leader of an international organization, the Asian Youth Act, a student organization that seeks to empower and educate students of Asian American heritage. As part of her activities for that group, she organized a social media campaign that drew more than 12.5 million views and 12,000 followers. She collaborated with Make Us Visible on the recent successful campaign for a New Jersey AAPI curriculum. She created the SHELL program at PHS, in which students lead study groups for English language learners. Ngan has been an advocate for the ESL program at PHS where she has advocated for ESL students to receive counseling and tutoring in their own languages.

Han Li, a rising senior PHS, is the founder of the Princeton Civics Project, an online platform for civic engagement and community participation that promotes events and programs aimed at racial justice. Han writes blog posts for the website and is one of two students who maintain it. He is also a leader of the New Jersey Civics Coalition. He has encouraged friends from his church and PHS to become more involved in community groups through this group and advocated for the New Jersey State Legislature’s successful passage of the AAPI curriculum in New Jersey schools.

Benjamin (Jamin) Nuland, a rising senior at PHS, has pursued several anti-racist initiatives with various PHS groups. He has been active on Latinos Unidos and helped organize the Hispanic Heritage Month Assembly, by recruiting volunteers, craft performances and served as emcee for the Hispanic Heritage Month program. He also began a campaign for a social justice award for athletes on PHS sports teams. He was also active in organizing the Day of Dialogue at PHS and was active in an effort to bring together all the social justice organizations at PHS. He has served as an advocate for ESL students at PHS and in the community.

Jealyn Vega-Ramos, a rising senior at PHS, is involved in numerous anti-racism projects. She is a leader of both Latinos Unidos, where she is the president, and the Princeton Girl Up Generation 1 (Gen1) Club, which she received a grant to educate the Princeton Latino community about COVID-19 and vaccinations. She also helped organize the Latinos Unidos Hispanic Heritage Month activities at PHS, which included a school-wide assembly in which she helped showcase Latino videos, music and dance highlighting Latino culture.

Simran (Simi) Rath, who recently graduated from Princeton Charter School, was a peer leader who addressed issues of racial justice and equity through her interactions with younger children. She helped educate students through a school-wide presentation entitled “Be Kind Online,” for the school’s Week of Respect.

Ida Sidik, a rising senior at PHS, is a member of the Black Student Union and the Black History 365 Committee, which seeks to incorporate programming at the high school regarding the history and contributions of Black and African Americans to American history. As part of that committee, Ida co-hosted a podcast that featured interviews of Black PHS staff members.

Eli Tenenbaum, a 2022 graduate of PHS, was co-organizer of the Day of Dialogue, a day-long event at PHS in which students from various minority cultures, ethnic groups and others staffed booths to educate their fellow students on equity, diversity and inclusion topics. During the event, students learned about topics in the news such as Muslim misrepresentation in American media, bias and stereotypes of the Hispanic Community, racial profiling experienced by African Americans at the hands of police, LGBTQ+ labels, and the meaning and events of Ramadan, and Latino and Indian dancing.

Sarah Villamil, a rising senior at PHS, is also a leader of the Latinos Unidos Club at PHS. She helped organize the first Hispanic Heritage Assembly for the school and collaborated with Latino and ESL students, as well as the PHS Band for the event. She and her co-leaders helped organize Latino Unidos activities for the Day of Dialogue. She is a member of the Gen1 Club, which recently won a grant from Poder en Salud, an organization supported by the CDC to support organizations that provide information and resources on COVID-19 and vaccinations to the Latino community. She and her co-leaders are planning a (future) in-person event with that goal in mind.