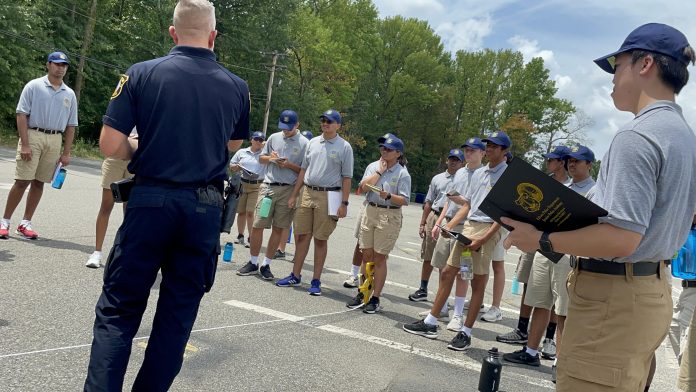 EDISON – The recruits of the Edison Police Department’s first Advanced Junior Police Academy had to put their thinking hats on after finding skid marks in the parking lot of Woodrow Wilson Middle School.

The skid marks led to a vehicle resting in front of a tree with a person pronounced dead at the scene.

It’s a scene all too familiar for Officers Michael Gurovich and John Douvas of the department’s Fatal Crash Investigation Unit.

The officers spent the morning and early afternoon going through a mock fatal crash exercise with the 30 recruits on July 28.

“We are not here to report on an accident, we are here to investigate, narrow the investigation and figure out why [the incident happened],” Gurovich said, encouraging the recruits to think outside the box.

The officers showed how they mark out and measure skid marks. The recruits also learned how officers use a formula to determine a speed of a vehicle in a serious crash.

The recruits batted around different factors that may have played a part in the mock incident:

“Was the person spooked by a deer that jumped out of nowhere?”

“Was the person joyriding, doing donuts and speeding in the parking lot?”

“Was the person coming from a barbecue or wedding (based on how the person was dressed) and had a bit too much to drink?”

“Was the sun in the person’s eyes when driving depending on the time of day?”

“Did the person suffer a medical condition?”

“Did the person drive into the tree intentionally?”

These are all possible scenarios that the Fatal Crash Investigation Unit may consider when conducting their investigation, Gurovich said.

Helping the officers during the investigation are the review of security cameras in the area, the review and inspection of the vehicle after police impound the vehicle and/or possibly the person’s cell phone or any belongings found in the vehicle such as medication or even a suicide note.

Gurovich said during serious vehicle crashes, the vehicle airbags will deploy on the side of where the person is sitting. An airbag will not deploy if a person is not sitting in the seat, he said.

The investigation could lead in all directions. If officers observed the passenger airbag deployed with no other person in sight, then that tells officers another person was in the vehicle.

“We would have to go out to the houses [across the field] to see if anyone has the Ring doorbell or security cameras,” Gurovich said.

The mock fatal crash exercise was just one of the many exercises the recruits experienced during the weeklong academy.

“We don’t really [have] anything that reaches the [age] demographic of 15, 16, 17,” Jackson said, noting one of the requirements for the academy was a 200-word essay. “We wanted to find a way to get into the community at their level and talk to them and show them more adult versions of what they learned in middle school, to give them real hard facts about law enforcement and about drinking and driving and texting and driving.”

The department holds a junior academy for middle school students every summer.

Jackson said by participating in the academy, he hopes the students will have a better understanding if they see something on social media or on the road and “will go back to their friends and say ‘Hey, they really are not bad guys, they are good guys. I learned a lot from them’.”

Ship said the academy would not be possible without the support and resources of Mayor Sam Joshi, his administration along with Police Chief Thomas Bryan and Deputy Chief of Operations Robert J. Dudash Jr. for allowing the program to take off and be a model for other agencies.

“The Advanced Junior Police Academy changes the trajectory for our children residents who ultimately will become students in our high schools and how they are going to end up in the near future when they go to college and begin a career,” he said.

The graduation ceremony for the Advanced Junior Police Academy was held on July 29 in council chambers.

Retired Lt. Robert J. Dudash Sr. was present to see how the Junior Police Academy has blossomed since he created the program many years ago.