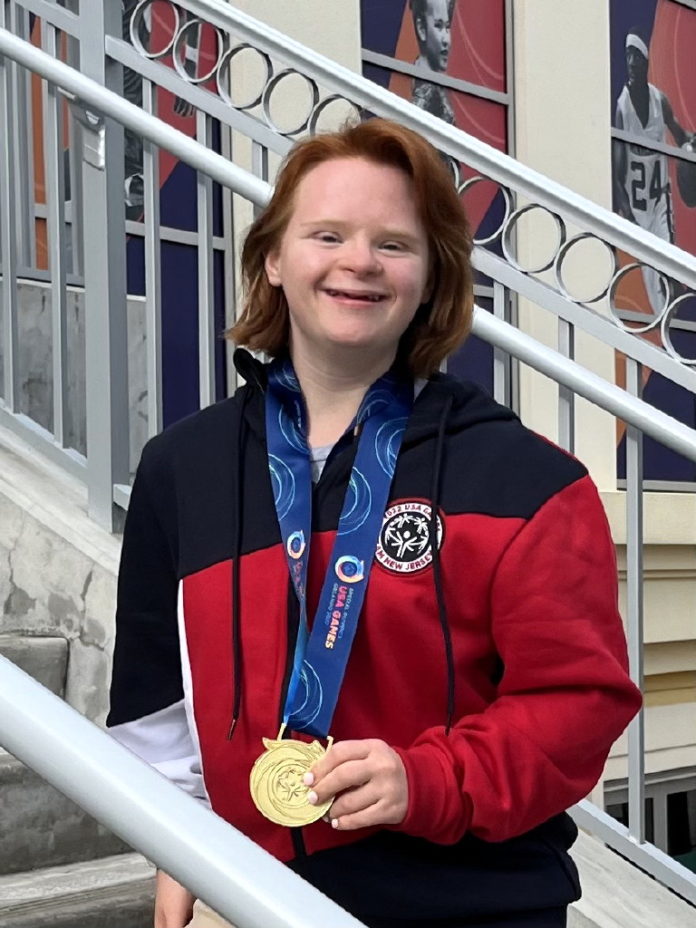 UPPER FREEHOLD — Support from the people in her hometown has helped Ireland Kosco develop as a competitive swimmer who recently won gold and silver medals at the Special Olympics 2022 USA Games in Orlando, Fla.

“She has a big fan base in our community we like to call Team Ireland,” said Donna Kosco, Ireland’s mother. “And we really owe such gratitude to Special Olympics, for shaping not only Ireland’s life, but ours and everyone who knows her, for helping to change people’s perceptions about what people with disabilities can do.

“Special Olympics has given Ireland and so many athletes such amazing opportunities to compete year-round in sports they enjoy, to develop confidence and make meaningful friendships, along with all the coaches and volunteers who help to make it possible,” Kosco said.

Ireland, who is 24, lives with her parents, Donna and Andy, and her siblings, older brother Drew and younger sister Haley, all of whom are her biggest fans.

According to the website www.sonj.org, every four years athletes from throughout the United States compete in the Special Olympics USA Games. This year, Team New Jersey, comprised of 175 athletes, Unified partners and coaches, competed at the highest level alongside more than 5,500 individuals from all 50 states and the Caribbean.

Ireland represented Team New Jersey in swimming and competed in the freestyle and butterfly events during the games, which were held from June 5-12 in Orlando, Fla.

“The competition and intensity of the athletes was definitely elevated at this level,” Kosco said, “and I think the adrenaline of the events led Ireland to post personal best times for her butterfly and freestyle events.

“Overall, Team New Jersey did extremely well in all of the sports and we are so proud of all of the athletes (16 in swimming) who represented our state in 14 sports at the USA Games.”

A passion for competing and a positive attitude add up to a winning formula for Ireland, whose family lives in the Cream Ridge section of Upper Freehold Township.

“I just love being in the water,” Ireland said, “and I like to compete. I tell myself I’m going to win.”

Donna added, “She swims with Special Olympics year-round and she always swims once a week. When she was training for the USA games she also trained with her New Jersey team. She also joined the Peddie School pool in Hightstown where her father took her once a week for extra training.”

In Orlando, more than 300 athletes competed in 34 swimming events at the Rosen Aquatic and Fitness Center.

Ireland is a three-sport Special Olympics athlete who has been competing in the Mercer County Area 11 for more than 10 years in swimming, cycling and cross-country skiing.

Ireland is a 2018 graduate of Allentown High School, where she was a member of the swim team and earned a varsity letter. She is fulfilling her dream of going to college and attends a three-year transitional/college experience program.

Donna shared that Ireland is known affectionately by her family members as “The Little Mermaid” because of her vibrant red hair and her love of the water and swimming.

According to Donna, Ireland took to swimming as a toddler at about the same time she was navigating learning to walk.

“Before she could even remember, she was in the pool. She has always loved the pool. Right before a race we have a joke,” Donna said. “She will say, ‘I’m going to beat those girls.’ She loves to compete. There is so much joy and emotion wrapped up in this. We have immense pride in Ireland’s accomplishments.”

When Ireland is not training or competing in one of her athletic endeavors, she has fun being onstage, recently representing New Jersey as Miss Amazing Junior Miss in a national showcase empowering young women with disabilities.

And the young woman has some advice to impart about how one should approach a major challenge such as competing at the national Special Olympics level.

“Why, be amazing,” Ireland said. “Just be amazing!”