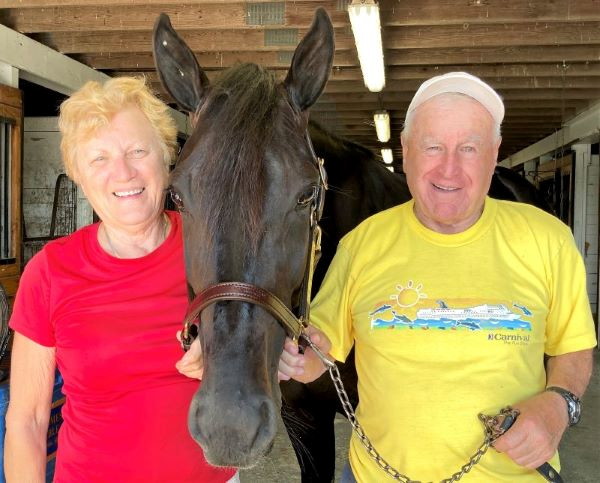 UPPER FREEHOLD — Jacquie and Frank Ingrassia have been together in harness racing for more than 50 years and the dynamic duo has no desire to slow down any time soon.

Jacquie, 75, and Frank, 89, have a stable of six horses based near their Imlaystown home, with their top horse this season, Dandy, the leader in the Pennsylvania Sire Stakes standings for 3-year-old male trotters.

“We are living the life we want to live,” said Jacquie, who handles the driving for the couple’s stable. “We just love it and we love the animals. We absolutely love the animals. It just means everything to us, it really does. We intend to do it for as long as we physically can. For our ages, we are unbelievably healthy. We are in a good spot right now.”

Jacquie has won seven of 31 drives this year and hit the board an additional 10 times. For her career, she has won 1,176 races, which is third most in North American history for a female driver.

Her biggest victory came behind Goalfish in the 2000 Yonkers Trot, making her the first female driver to capture a Triple Crown event.

In 1999, Jacquie was inducted into the Jersey Shore Sports Hall of Fame.

In 2019, she received the Governor’s Award for Horseperson of the Year from the New Jersey Department of Agriculture.

“I enjoy it,” Jacquie said about driving. “If I felt I was not capable, or dangerous, I certainly wouldn’t do it. If that time comes, I’ll just quit. It will come, no doubt. I might be 80 or so, we’ll see. If I thought I wasn’t doing justice, then I wouldn’t be out there. It’s not an ego thing. I just enjoy doing it. I don’t stress about it. If I win, I win. If I don’t, we’ve only got ourselves to blame; or me to blame.”

Frank has won 453 races as a trainer. He was sidelined, but only briefly, earlier this year after getting a new knee. He was back in a jog cart in two weeks.

“The worst thing you can do is nothing,” Frank said. “That’s the worst you can do. You have got to keep moving.”

He joked that he had additional motivation to keep moving.

“I’m scared of her, so I’ve got to do it,” Frank said, motioning toward Jacquie.

“Yeah, you better get out there,” Jacquie replied in mock sternness.

“There’s no retirement, she’s got me penciled in for a couple more years,” Frank said.

“I always tell him that,” Jacquie replied. “More than a couple more, Frank.”

Jacquie and Frank met in 1971 at Yonkers Raceway in New York.

Jacquie, who was born in England, came to the United States to work for Tony Abbatiello. He sent her to Yonkers with several inexperienced horses to train and she ended up in the same barn as Frank, who was born in Flushing, N.Y.

“That’s all she wrote,” Jacquie said.

“You know what we always say? We weren’t made for each other, we deserve each other,” Jacquie said with a laugh. “It’s worked. We have had some ups and downs. When we first started out, we had absolutely nothing, but it’s worked for us.

In addition to the owners, the Ingrassias credit assistant Andrew Sibiga as being indispensable to the stable’s operation.

“He has been with us for 28 years,” Jacquie said. “We couldn’t manage without him.”

As for the stable’s 3-year-old trotting colt Dandy, the son of Cantab Hall-Cocoacabana has been a revelation.

Dandy was bred by Jacquie, Arden Homestead Stable, and Vieux Carre Farms, but did not appear to be much of a prospect as a yearling. He is now owned by Jacquie after the others decided to give up their ownership shares.

“We decided to start training him and see what we had,” Jacquie said. “He was just a good boy right from the start. He stands terrible, but he’s clean gaited and he has the right disposition. It was shocking to us. Even at (age) 2, I said to Frank this colt has got some ability. He’s just got that desire. He just wants to do it.”

Dandy had a win and two thirds in five starts as a 2-year-old.

He began his 3-year-old campaign in the Bobby Weiss Series at The Downs at Mohegan Sun Pocono, winning a preliminary round and finishing second in the consolation final, before hitting the Pennsylvania stakes circuit.

“I’ll give him a couple starts in between,” Jacquie said about Dandy, who has earned $142,163 lifetime. “He’s done it before (with time off). He stays pretty fit.

“He’s really matured from 2 to 3. We can only hope that continues, but if he never does another thing, he’s really done too much for us.”

Jacquie and Frank might purchase a yearling or two this fall with the money earned by Dandy as they look to continue their love affair with racing.

“We just love the camaraderie when we go to the track,” Jacquie said. “We enjoy the banter back and forth. I would hate to think, ‘What am I going to do now?’ Just sitting at home, you get old real quick doing that. This is exactly where we want to be.”