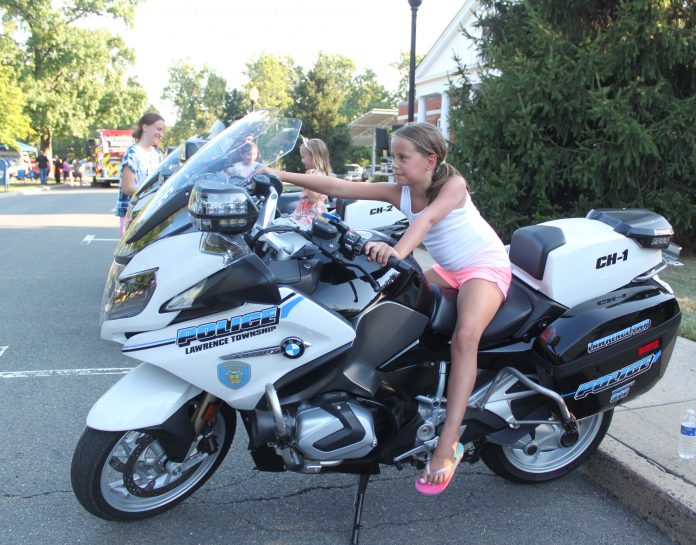 When Faith Jasper was asked about her favorite part of Lawrence Township’s National Night Out celebration, her quick answer was “the food.”

“I liked the hot dogs. I liked the music, people talking and the bounce house. It was really fun,” the 12-year-old girl said of the event, held Aug. 2 on the front lawn of the Lawrence Township Municipal Complex.

Faith’s parents, Mark and Camillia Jasper, who brought their three children to the celebration, said the event goes beyond the food. They want their children to learn about the community.

“I want them to see the good side of the world. I want my children to become familiar with the police and the community,” Camillia Jasper said.

The goal of National Night Out, which has been held in cities and towns across the United States since 1984 on the first Tuesday in August, is to forge a bond between local police and the residents they serve, according to the National Association of Town Watch.

National Night Out also is a chance for everyone to come together, and this year’s event was special because it was the first time that it had been held since 2019, said Lawrence police Lt. Joseph Lech IV.

“It’s been a rough couple of years. We are excited to hold it. We had many, many requests to hold it last year, but we couldn’t do it because of the COVID-19 spikes,” Lech said.

Lawrence Township has held National Night Out for many years. The first few ventures were small scale affairs, held in different neighborhoods across the township so residents could meet the police officers on a one-on-one basis.

Later, it was held at the Eggerts Crossing Village development off Johnson Avenue. Township officials decided to move it to the front lawn of the municipal complex, where they could spread out the celebration, officials said.

Barbara Mooring said she attends National Night Out every year because it is a “wonderful, community-supported event. I like to support my community and bring everyone together.”

“The children need to learn that police officers and firefighters and EMTs (emergency medical technicians) are their friends,” Mooring said as she watched some youngsters explore a police patrol car parked on the lawn. A fire truck was parked nearby.

Besides the patrol car and the fire truck, children could sit behind the wheel of a HUMVEE belonging to the New Jersey Army National Guard, one of many groups that set up tables at National Night Out.

Boy Scouts and Girl Scouts set up tables on the lawn, as well as the Lawrence Township Education Foundation, the Mercer County Prosecutor’s Office, the Lawrence chapter of the League of Women Voters and Womanspace, which helps victims of domestic violence.

Lawrence police Detective James Steimle, who is the department’s K-9 officer, put K-9 Officer Brix through his paces during the event. The German shepherd is trained to sniff out drugs and also patrols with his handler.

Steimle turned Brix loose to find “narcotics” in one of three backpacks on the ground. The dog sniffed the backpacks and sat down by the one holding the “narcotics.”

Many child-oriented activities were set up on the front lawn. There were long lines for the bounce house and the rock-climbing wall, which proved challenging for many children. The goal was to use pegs to climb up to the top and tap a red button.

There was plenty of food, from hot dogs cooked on the grill by police officers to corn on the cob, watermelon, pizza and Italian ice. There was very little food left over at the end of the event.

When Mooring was asked about her favorite part of National Night Out, the answer was easy.