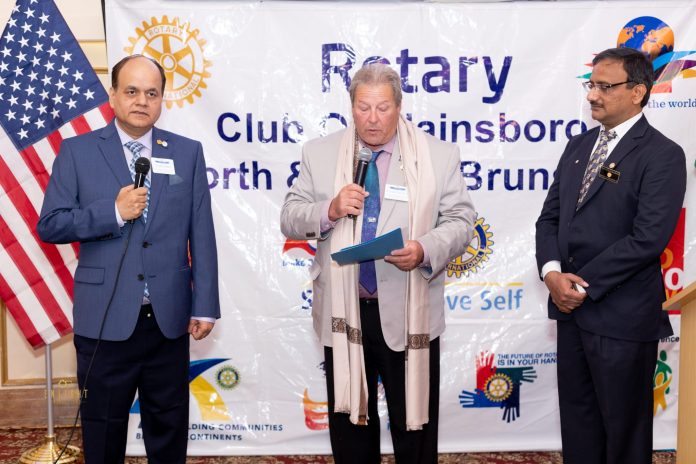 NORTH BRUNSWICK – The Rotary Club of Plainsboro, North and South Brunswick, held its annual Changing of the Guard ceremony and inducted new office bearers for the rotary year 2022-2023.

Outgoing President Blisse Vakkalagadda presented various projects that the club completed during her presidency. Blisse along with Sudharani Kankanala, had also played a pivotal role as mentors of the Interact Club of North Brunswick and helped organize various meaningful service projects, as well as some impactful international service projects.

District Governor (DG) John Shockley, Past DG Dr. Tulsi Maharjan and Kalpana Patel, president of the Rotary Club of Robbinsville-Hamilton, were in attendance for the changing of the guard ceremony.

Shockley conducted the oath ceremony for incoming President Vijay Garg and his team.

During his acceptance remarks, Garg said he is looking forward to working with the team and continue doing various community projects aligned with the Rotary International causes.

“I am excited and honored to accept the role,” he said.

Garg is a successful entrepreneur, past North-East president of ITServe, and a board member of TiE, GOPIO and other social organizations. Garg with his community reach and leadership skills will help the club in taking up bigger projects and extending its reach, board members said.

The club is celebrating its 20th charter anniversary this year and recognized six senior members – Pannala, Sunil Nambiar, Rajeev Mehta, Nishit Mehta, Mahalingam Narayan and Darshan Doshi – who have completed over 12 years of service as “dedicated and passionate” Rotarians.

For more information about The Rotary Club of Plainsboro, North and South Brunswick visit PlainsboroRotary.org.