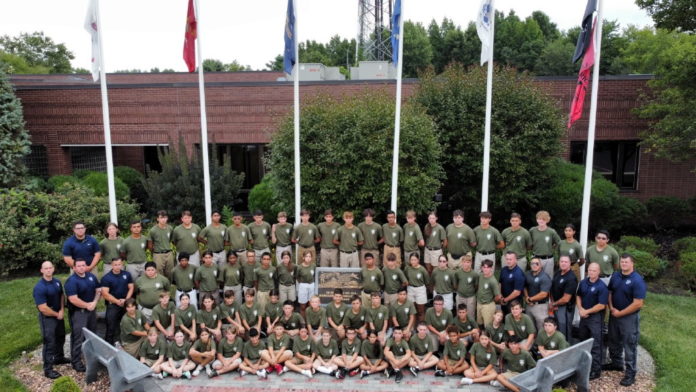 MANALAPAN — The Manalapan Police Department conducted its third Manalapan Police Youth Academy from Aug. 1-5 at Manalapan High School. A class of 70 recruits between the ages of 12 and 16 graduated from the academy during a ceremony held on Aug. 5.

The academy was under the direction of Patrolman Kyle Earley and the 2022 class was the largest group in the short history of the program.

At that location, officers trained the young people in active shooter, room clearing and hallway movement situations, and the recruits trained on the active threat simulator.

The recruits also visited Coast Guard Station Sandy Hook where they toured the facility and boats, and practiced rescue techniques.

Following their tour of the Coast Guard station, the participants went to the beach at Sandy Hook to complete team-building activities and physical training, according to Earley.

During the week that the Manalapan Police Youth Academy was held, demonstrations were conducted by the New Jersey State Police Bomb Squad and the New Jersey State Police Mounted Unit (horses); while Manalapan police officers demonstrated special weapons and tactical equipment and discussed gun safety; and the recruits learned about the dangers of driving under the influence by using Fatal Vision goggles and golf carts.

Each day began with military drills, followed by lessons in the classroom. Each day ended with team-building activities and physical training.

Earley said, “The recruits arrived the first day as individuals and by the last day they were a strong team. The recruits were challenged with physical tasks throughout the week and were able to overcome obstacles by using teamwork, discipline and perseverance.

“It’s a great feeling to be able to work with the youth in the community and give them a
positive bond with the police officers. All of the officers who work with the program
dedicate time away from their own families to be positive role models.

“We would like to thank Manalapan Police Chief Edward Niesz, Manalapan High School, the Manalapan-Englishtown Regional School District and Board of Education, and the Township Committee for supporting the program.

“Next year we plan to expand the program to different weeks to accommodate the growing
numbers and different age groups,” Earley said.

For more information about the Police Explorers or the Manalapan Police Youth Academy, contact Patrolman Kyle Earley at kearley@manalapanpolice.org