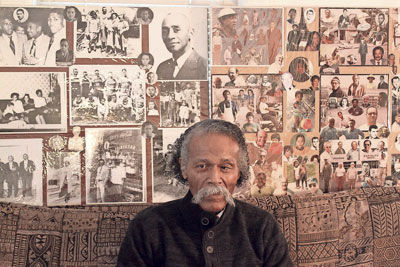 Some of those images will be on display as double-sided banners on utility poles for the next year in the Witherspoon-Jackson neighborhood. The Arts Council of Princeton organized the public art display in honor of Broadway, who died in 2020. He was 81 years old.

Broadway combined his collection of photographs to create a series of collages featuring neighborhood residents and events, said Adam Welch, executive director of The Arts Council of Princeton.

Broadway’s photo collages include pictures of many residents of the Witherspoon-Jackson neighborhood – mostly African Americans, but also many of the Italian Americans and Irish Americans who lived side by side with them.

The banners on display are based on those collages, which were subsequently acquired by Princeton University. The banners were placed on the utility poles in the Witherspoon-Jackson neighborhood earlier this month.

The banners start on Paul Robeson Place, around the corner from The Arts Council of Princeton. They continue down John Street and onto Birch Avenue, where Broadway grew up. They continue on lower Witherspoon Street toward the Witherspoon Hall municipal building.

“Much more than being a photographer with a camera, Romus was an artist and storyteller with a tool,” said Princeton Councilman Leighton Newlin, who grew up in the Witherspoon-Jackson neighborhood.

“Whether we are visitors or residents, we can see pictures of ourselves. Everyone can see a pictorial history of the African American and Italian American experience here in Princeton,” Newlin said.

In a 2016 interview with The Princeton Packet, Broadway said he began documenting the Witherspoon-Jackson neighborhood soon after he got his first camera in 1955.

“The reason I started doing it is because the only pictures that many children had was the school picture. I wanted to catch them in their setting, with their friends, so they could see themselves,” Broadway said in the 2016 Princeton Packet article.

Broadway took photographs of the Witherspoon-Jackson neighborhood residents wherever he could find them – at weddings, in social halls and on the street. Sometimes, it was just candid photographs of the people going about their business.

Broadway recalled the Italian American families – the Pinelli, Leiggi, Cifelli, Boccanfuso, Perone, DiMeglio and Balestrieri families among them – that lived in the neighborhood, as well as the African American families. They owned gas stations and bars, and some of their offspring became Princeton police officers.

Many of the African Americans whose photographs appear on the collages worked as laborers, chauffeurs, butlers, cooks and maids in households on Westcott Road and Cleveland Lane, Broadway said in the 2016 Princeton Packet article. They were hotel workers and waiters, plumbers and a couple of schoolteachers.

“They did the dirty work and took the jobs no one else wanted to do, and they dignified it. They were underpaid, overworked, and underappreciated,” Broadway said.