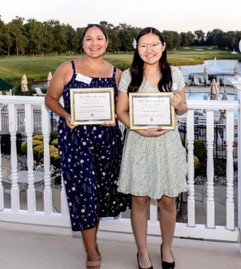 JACKSON — The Women’s Club at Westlake recently presented five deserving Jackson
women with scholarships to aid them in their pursuit of a higher education and meaningful
careers.

The recipients earned the scholarships based on their outstanding academics, service to the
community and financial needs, according to a press release from the Women’s Club at Westlake.

• Estelle Balsirow is a 2022 graduate of the Marine Academy of Technology and Environmental Science. She will attend Yale University where she will pursue her interests in music, science and computers.

• Allison Janson graduated from Rider University and will enroll at Quinnipiac University to pursue a master’s degree in pathology.

• Jalyn Postadan graduated from the Ocean County Vo-Tech Performing Arts Academy and is enrolled in the Ailey BFA program at Fordham University.

• Selene Thompson completed the Stars Program at Ocean County College and is enrolled in the nursing program at Georgian Court University.

This year marks 19 years in which scholarships have been awarded to 84 Jackson women, according to the press release. More than $72,000 has been donated by the Women’s Club of Westlake and the scholarships are funded entirely by the club’s dues.

The scholarships are presented to women who are currently graduating high school, already attending college and/or are returning students.

Wedgeworth illustrated techniques for staying fit and flexible as one ages and had the audience members moving in their seats, according to the press release.

Each March the scholarship application is posted on the Women’s Club of Westlake website.
Women from Jackson who are currently attending school, planning on furthering their education, or returning to finish a degree are eligible to apply for a scholarship.