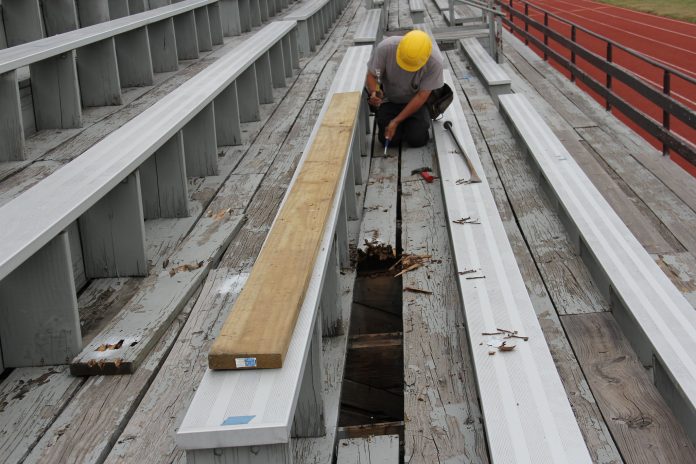 SOUTH RIVER – The South River School District is proposing a $33.1 million bond referendum for early next year that calls for the complete replacement of Denny Stadium, which “is at the end of its life cycle,” according to professional engineers.

The referendum also calls for the construction of a pre-K building to accommodate the growing enrollment of children ages 3-4 and lower the class size at the primary and elementary schools. A second ballot question seeks approval to turf the field at Denny Stadium, according to a press release on Aug. 9.

If voters approve both questions, the total average annual cost per property taxpayer, at the average borough assessment, would be $149.13. A date for the referendum has not yet been set.

Currently, borough school officials are making necessary repairs to Denny Stadium to ensure it is a safe structure in time for the next public gathering.

The referendum would make the facility accessible to people with disabilities, in accordance with the Americans with Disabilities Act (ADA) of 1990.

At the direction of school officials, an engineering firm conducted a structural condition survey of the decades-old wooden stadium. Engineers with Harrison-Hamnett, Pennington, determined the structure “is at the end of its life cycle” in a July 22 report submitted to the district’s building and grounds supervisor.

The engineers, hired to conduct the safety analysis annually, provided a list of recommendations to ensure structural safety at the South River High School stadium, adding that the facility should no longer be used following the 2023-24 school year.

“The time has come where each year certification becomes problematic and the risks are not worth taking,” the engineers stated. The firm noted the stadium is structurally sound in the interim, but consultants listed necessary repairs for district officials to undertake to ensure public safety.

“We are taking this report very seriously and have directed our maintenance workers to prioritize Denny Stadium for immediate repairs,” said Schools Superintendent Sylvia Zircher. “We are replacing floorboards to avoid tripping hazards and are further reinforcing the structural columns underneath the stadium. We will ensure safety. But it is clear that this is only a temporary fix.”

In early August, district workers were removing old floorboards that were rotting and buckling, removing rusted nails from the structure. New planks were installed, as part of an ongoing project that is to be completed by Aug. 19, when a borough fireworks display is scheduled.