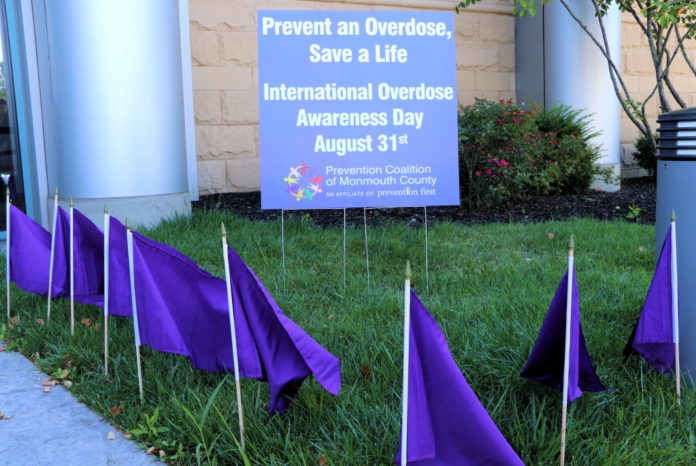 A sea of small purple flags will adorn the grass along the front entrance to the Monmouth County Prosecutor’s Office in Freehold for the rest of the month, leading up to International Overdose Awareness Day on Aug. 31, with each flag representing an individual lost due to a drug overdose in Monmouth County this year.

“As overdose deaths rise to previously unthinkable levels, both here in Monmouth County and nationwide, it is so vitally important to resist discouragement and to continue to do absolutely everything in our power to mitigate the human toll of this epidemic,” Acting Monmouth County Prosecutor Lori Linskey said.

“A big part of that is promoting remembrance; reminding our community that each person lost is not some nameless, faceless statistic, but a dynamic individual who leaves behind hopes, dreams, and friends and family members who remain devastated by their absence,” Linskey said.

Linskey was joined during the week of Aug. 15 by Acting First Assistant Prosecutor Michael J. Wojciechowski, Acting Chief of Detectives John G. McCabe Jr., additional colleagues and community partners with the Prevention Coalition of Monmouth County for a remembrance ceremony during which the flags were put into place, according to a press release from the Monmouth County Prosecutor’s Office.

As of the week of Aug. 15, due to the efforts of the coalition, similar public displays will be in place in 43 of Monmouth County’s 53 municipalities.

A total of 79 people died due to a drug overdose in Monmouth County during the first half of 2022, according to statistics compiled by the New Jersey Coordinator for Addiction Responses and Enforcement Strategies (NJ CARES) and reported by the prosecutor’s office.

Those figures mirror statewide and national trends. New Jersey recorded a 10-year low of 1,223 overdose deaths in 2012, but that figure has since soared to more than 3,000 in three of the last four full calendar years, according to the press release.

Driving the trends has been the proliferation of increasingly deadly quantities of fentanyl, a synthetic opioid that can be made quickly and cheaply, according to the press release.

Fentanyl is often found mixed with other narcotics that can exacerbate its danger. Two milligrams of fentanyl, about the size and appearance of a few grains of salt, can be a fatal dose.

The prosecutor’s office has played a lead role in attacking the local opioid epidemic on multiple fronts; in 2014, Monmouth became the second county in New Jersey to train all of its police officers on the use of naloxone (Narcan), a nasally administered drug that works to quickly and safely reverse the effects of an overdose.

Police officers in Monmouth County administered naloxone on more than 2,600 occasions from 2017 through the first quarter of 2022, with the overwhelming majority of those deployments resulting in the recipients going on to survive, according to the press release.

In 2020, with funds provided by the New Jersey Office of the Attorney General NJ CARES Operation Helping Hand grant, the prosecutor’s office announced the establishment of a 24-hour-a-day, seven-day-a-week opioid dependency helpline, 833-OHH-CARE.

The helpline remains staffed by recovery coaches from Recovery Advocates for the Shore, who link callers to treatment through CPC Behavioral Healthcare, according to the press release.

Earlier this year, the prosecutor’s office hosted the first graduation ceremony for its new Recovery Diversion Program, an initiative that substitutes peer recovery and treatment services for nonviolent municipal court offenders, rather than traditional prosecution.

Municipal defendants who successfully complete substance use treatment, maintain contact with their peer recovery coaches and remain arrest-free are eligible to have their charges dismissed and expunged, according to the press release.

There are currently about 30 drop boxes located countywide. For a full list of
participating police departments that administer the Project Medicine Drop initiative, go to

“This epidemic did not develop from just one cause and fixing it won’t be the result of just one solution,” Linskey said. “We remain deeply committed to leveraging innovation toward addressing it from every conceivable angle.”