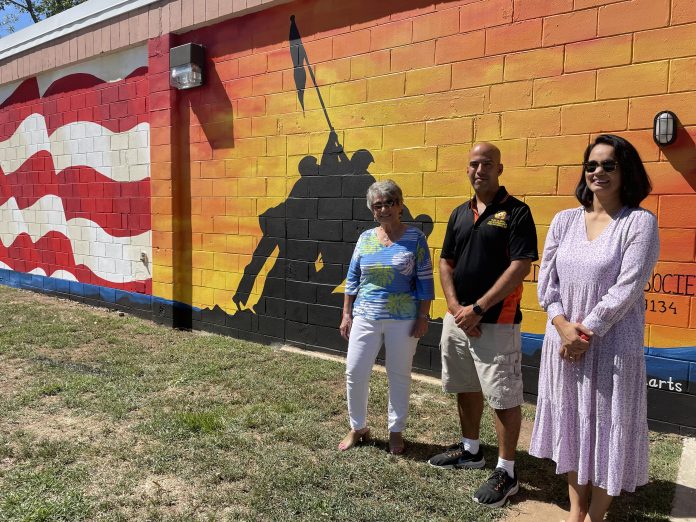 EDISON – Among the tractor trailers and industrial sites on National Road, there is now a beautiful mural depicting essentially what every military branch stands for: the American flag.

The 48-foot by 11-foot mural is painted on the back of the Edison Veterans of Foreign Wars (VFW) Post 3117 building.

Artist Nitu Pilania, of Iselin, was commissioned by the Edison Arts Society (EAS) to paint the mural, which took 12 days and 40 hours to complete.

Pilania worked through the oppressive heat and mosquitos from July 26 through Aug. 8.

“That was the most challenging part,” she said of the heat and mosquitos. “I worked later in the evenings and one early morning.”

“Everyone loves flags when it comes to veterans, their heart belongs to the flag, it is what they live for,” Pilania said.

One part of the mural is the American flag. The mural also depicts the outline of the six U.S. Marines who raised the U.S. flag over the Japanese island of Iwo Jima during World War II; the U.S. Navy’s aircraft carrier USS Forrestal (CV-59) commissioned during the Vietnam War and also a number of aircraft.

“We tried to represent (all the military branches), different time periods,” said Gloria Dittman, president of the EAS.

Dittman and Pilania joined Oliveira to unveil the mural on Aug. 13.

“[Pilania] worked really hard in 94 to 100-degree weather for about two weeks,” Oliveira said. “[The mural] came out amazing. We want to say, ‘Thank you, we appreciate everything that you did.'”

Oliveira also thanked EAS for helping the Post finance some of the project.

Dittman thanked the Post for the opportunity to honor the military service men and women.

“The EAS is 25 years old and the reason we do murals is to enhance the beauty of Edison, to make Edison look better,” she said. “Since your building is a little bit off the beaten track and because we honor veterans so very, very much, when Phil called me there was absolutely no hesitation in making your building look more beautiful. We’re glad we could do it.”

The mural project at the VFW is the sixth mural in the township.

The next mural project is expected to start soon at the Unity Bank building on Oak Tree Road. Dittman said the mural will be the first mural in the north side of town.