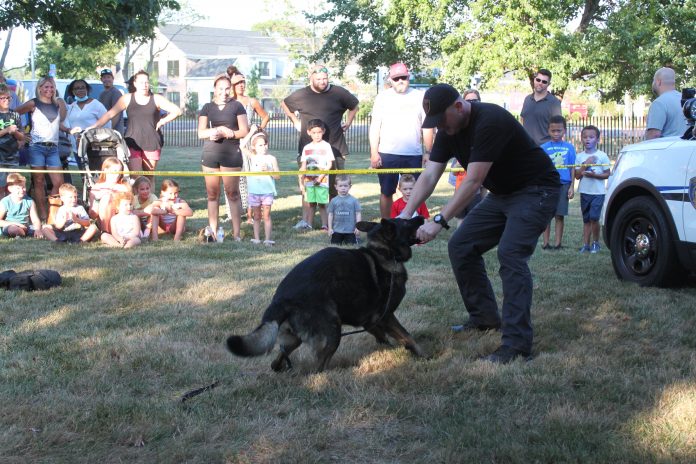 Lawrence Township officials are urging residents to vote often in support of a PetSafe-sponsored grant contest to help pay for a planned dog park at Hamnett Park on Ohio Avenue.

The deadline to cast a vote for Hero Dog Park is Aug. 31. The planned dog park would be the second one in the township.

Lawrence is one of 20 finalists in PetSafe’s “Bark for Your Park” nationwide grant program, township officials said. PetSafe, which sells pet-related products, is sponsoring the grant program to help fund safe, off-leash areas for dogs and their owners, according to www.petsafe.net.

Residents and supporters of Lawrence’s planned dog park can cast a vote once a day by visiting https://barkforyourpark.petsafe.com Although it is not known how many voters have been cast for Hero Dog Park, township officials said they learned that more than 35,000 votes have been cast nationwide.

At stake is a $25,000 grant that can be used for new equipment in a dog park, township officials said. The four finalists that receive the most votes will receive the $25,000 grant. That is why residents are being urged to go online and cast a vote.

The four winners will be announced Sept. 2.

Plans for the dog park are underway no matter what the outcome of the grant contest. Construction bids for Hero Dog Park are already out “on the street,” township officials said.

The bids will be opened Sept. 8 and a contract is expected to be awarded at the Lawrence Township Council’s Sept. 20 meeting. Construction is expected to start in the fall.

“South Lawrence needs a dog park,” he said, noting the dog park in Village Park is in the northern part of the township.

Superintendent of Recreation Nancy Bergen suggested naming it “Hero Dog Park” after reading an article in “The Lawrence Ledger” written by the late James Hewitt in 1995. Hewitt, who died in 2012, was a World War II veteran and was present during Japan’s attack on Pearl Harbor, Hawaii in 1941.

Hewitt, who was a retired Lawrence police officer, wrote that when he was stationed on a small island in the South Pacific, he befriended a captured German shepherd that had been trained as a war dog by the Japanese army. The dog was adopted by Hewitt and his U.S. Army unit, who named him Moose.

Hewitt kept track of Moose, hoping to be reunited with the dog after the war. But Moose was killed in June 1945 when he leaped on a hand grenade to protect his handler. The hand grenade was tossed toward Moose and his handler by one of two Japanese soldiers they had discovered hiding in the grass.

Hewitt received a letter from the Central Pacific Base Command that explained how Moose died. The dog knew the hand grenade was a weapon and he jumped on it as it exploded. The dog saved his handler’s life, the letter said.

“Somewhere on the Pacific Island of Okinawa (Japan) where Moose died, there is a grave marked ‘Moose, U.S. Army K-9 Corps, Army Serial Number OX-79, Killed in action against the enemy June 20, 1945,'” Hewitt wrote in the newspaper article.