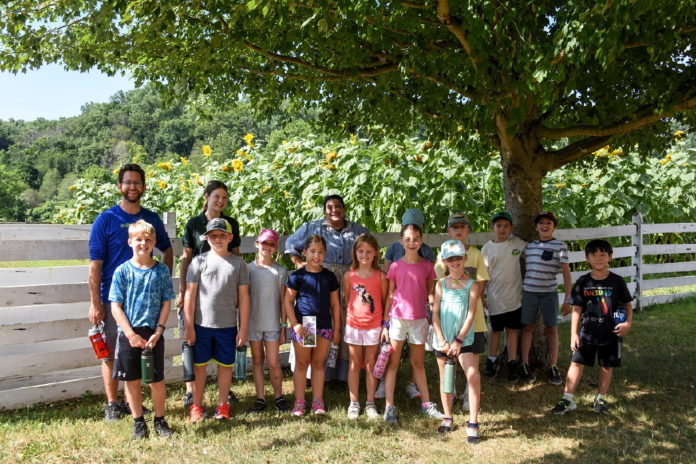 From the smiles on the campers’ faces, it was clear the Monmouth County Park System’s first offerings of its Grown in Monmouth summer camp was a success. Held from Aug. 8-12, each day took campers to a different site and brought new adventures.

“The Monmouth County Board of County Commissioners is thrilled about the first offering of its Grown in Monmouth summer camp,” said Commissioner Director Thomas A. Arnone, who is the board’s liaison to the Division of Economic Development.

“The partnership between the Grown in Monmouth program and the park system has led to this incredible opportunity for our young residents to celebrate the county’s deep agricultural roots and its exciting future,” Arnone said.

“Throughout the week, the campers explored multiple county parks such as Historic Longstreet Farm and Turkey Swamp Park, as well as some of our local farms including Kula Urban Farm, Battlefield Orchards and Allaire Community Farm,” said Commissioner Ross F. Licitra, who is the board’s liaison to the park system. “I want to commend the park system staff for coordinating with Grown in Monmouth to make this camp a success.”

During the week, the campers explored Monmouth County’s past with a visit to Historic Longstreet Farm in Holmdel, the park system’s 1890s living history site. Greeted by farm staff dressed in period clothing, the campers toured the farm and churned ice cream, according to a press release.

While Historic Longstreet Farm was the ideal spot to learn about the past, a trip to Kula Urban Farm in Asbury Park revealed to campers how agriculture in Monmouth County is evolving as they saw a smart greenhouse that uses hydroponic technology and a community garden cultivated from empty lots, according to the press release.

Building on that visit, campers were visited by Hope Neis from Robbinsville Hydroponic Farm who gave a demonstration about how to grow lettuce using hydroponic technology. The campers sampled fresh lettuce grown this way and received a starter kit to take home.

According to park system naturalist Jason Goldman, who organized and ran the camp, “One of our goals was to connect the children to fresh food. The day after the demonstration, one of the camper’s moms said their child had asked for a second serving of salad for the first time.”

Other activities that helped forge this connection included foraging for wild blueberries at Turkey Swamp Park in Freehold Township and getting fresh peaches at Battleview Orchards in Freehold Township. The week also included a visit to the petting zoo at Allaire Community Farm in Wall Township.

Although the Grown in Monmouth camp only lasted a week, the experience will stay with the campers much longer as it cultivated an appreciation of agriculture and its role in the county’s past, present and future, according to the press release.

As for the future of the Grown in Monmouth camp, the park system hopes to offer it again as part of its array of nature, sports, performing arts, outdoor adventure and general interest camps that are offered each summer, according to the press release.