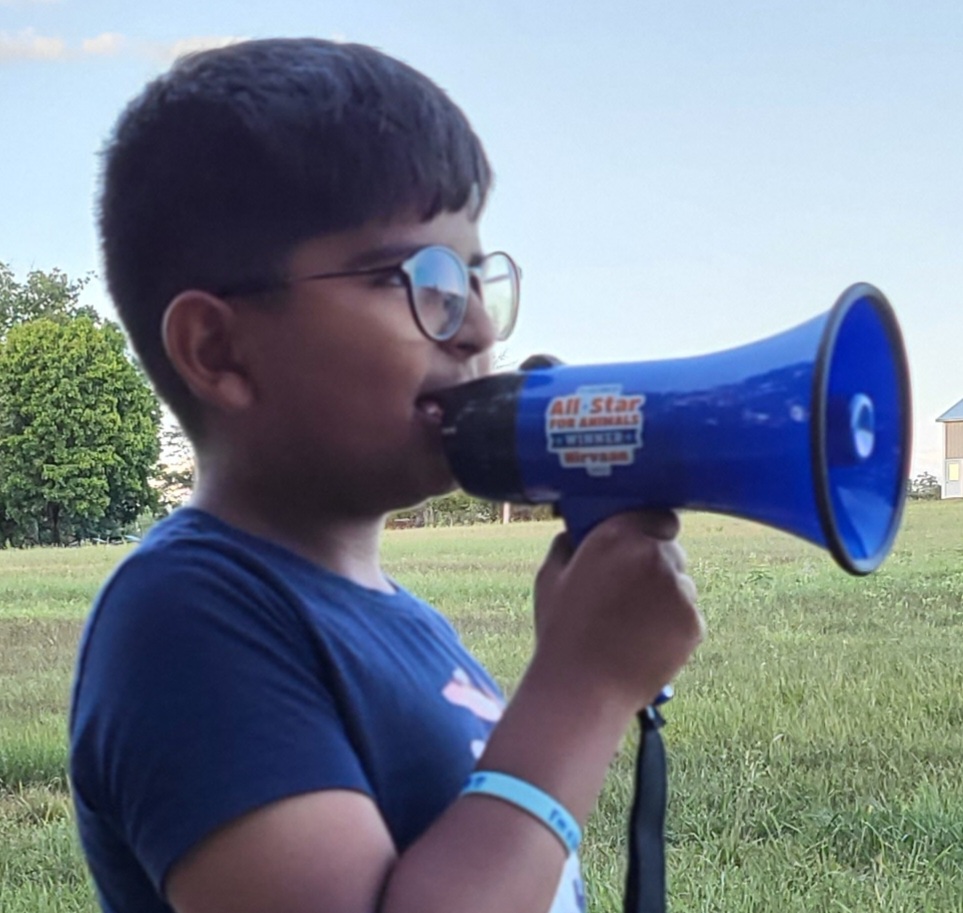 “My mom tells me I was in her tummy when I did my very first protest,” he said.

At 11, that advocacy has continued and has won him top honors in PETA (People for Ethical Treatment) Kids’ 2022 All-Star for Animals contest.

“It means a lot to me winning [the contest] because I get to be the voice of animals. People may listen to kids more than they may listen to grownups,” Nirvaan said.

PETA’s goal to save animals, to speak for the voiceless, to bring about change for the animals align with Nirvaan’s passion for the cause.

“PETA is a well-known name around the world,” Nirvaan said. “They have given recognition to animal causes, which is why I am passionate. I used to read PETA comics when I was little.”

Nirvaan has joined his mom Neetu at countless of Middlesex County Commissioner meetings after flooding from Hurricane Ida in 2021 affected the Johnson Park Zoo in Piscataway.

He presented his own research about why the animals at the zoo should be moved to reputable sanctuaries. His efforts paid off. County officials said they plan new facilities for the red fox, raccoon, pythons, and other animals.

Nirvaan has also volunteered his time to help animals in sanctuaries, and he has hit the streets to protest against the meat industry.

Often times, one can find Nirvaan with the bullhorn.

“What is important to me about protests is that the time you spend on them could save animals’ lives,” he said. “Most people don’t know that they are supporting animal cruelty. We try to educate them hoping to change their minds. And change comes. Many big designers have dropped fur due to protests. Circuses stopped animal acts due to protests too.”

Nirvaan is a big proponent of veganism calling it a “win-win-win-win” situation. He has been a vegan since he was born.

First win: There is no cholesterol in plants and plant foods are healthy.

Second win: Being vegan preserves the land and trees used to kill and raise animals.

Third win: It can not only stop greenhouse gases from going into the atmosphere, but reverse global warming.

“They deserve to live just like us. Because they also feel emotions and pain like us. I want every living being to be ‘being living,'” he said.

Nirvaan, who is set to begin sixth grade in the fall, aspires to become a vegan chef. His favorite food includes Mac N’ Cheez and some of his favorite dishes to cook are scrambled “eggs” (tofu), “BLTs” (Seitan bacon strips), sushi, (avocado, cucumber, carrots, and sometimes tofu), and “steak” (Seitan).

When not attending protests or making his favorite dishes, he enjoys spending time with his three adopted cats – Caspurr, Babbar and Bijli – and building them cat castles.

“Whether he’s marching in vegan rallies or urging county leaders to help animals languishing in a roadside zoo, Nirvaan is setting a heroic example for young people everywhere,” said PETA Senior Director of Youth Programs Marta Holmberg. “Animals have an ally in Nirvaan, and PETA Kids is delighted to honor him for leading us all toward a kinder future.”

In addition to a year’s supply of vegan cookies from San Diego–based Maya’s Cookies, Nirvaan will receive a personalized bullhorn, an assortment of merchandise from PETA Kids, and yearlong bragging rights of the “All-Star for Animals” title.