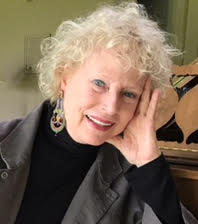 Joan Needham, a prominent Princeton artist, passed away on the afternoon of Wednesday, August 3rd, 2022. Her six children, Linda, Scott, Leslie, Dian, Lisa, Chris, and her adored husband of 65 years, Joseph Needham, were by her bedside, at their home in Hopewell. In addition to her immediate family, she leaves behind 9 grandchildren and 4 great grandchildren.

Born on July 17th, 1935, Joan grew up in Merion PA and lived in the Princeton area for decades. Joan received a scholarship and earned a BFA from Moore College of Art and Design in Philadelphia, PA, where she won several accolades and awards for her children’s clothing design. She studied abroad with Laurence Barker, a master
Joan Barbara Needham papermaker in Barcelona, Spain. In 1981, she returned to the states and introduced paper making to central New Jersey, She was active with the Dieu Donne Paper Mill in NYC.

Joan has exhibited locally and internationally throughout the United States, Japan, China, Spain, England, and France. She was represented by the Elaine Starkman Gallery in New York City from 1982-1996, was a recipient of the New Jersey State Council on the Arts Fellowship, and served on the New Jersey Public Arts program. She has a lobby installation locally at the Richard J. Hughes Justice Complex in Trenton, NJ.

Joan’s career as an arts educator spans more than 36 years working at Artworks, The Princeton Art Association, and The Trenton After School Program. She was a Professor at Mercer County Community College for 33 years, where she created a course in Papermaking.

From 2007-2011, she volunteered her services as a teacher for the organization Philani in Khayelitsha, South Africa, introducing a printmaking program, and so much more. By developing their skills, the women were given the opportunity to sell their prints and provide an income for their families. She dedicated much of her life to this cause, and had hopes of visiting Africa a third time.

Joan led a rich and exciting life. While raising 6 children, loving a husband with a passion for racing cars, her extraordinary career did not take away her dedication to her family. She made time for all their needs and activities, attending school plays, concerts, museum trips, tennis lessons, wrestling, track, car races and hiking the Appalachian.

Despite her busy lifestyle, her garden was her love and passion. It was a masterpiece in itself. Anyone that met Joan, was taken on a tour of her garden and understood how much it meant to her. It was the one place that she could call her own.

She lived out loud, and on purpose. She would often say to her girls, “Heck, I’ve done more in my life than all 5 of you put together!” She lived and died by her own rules.

In lieu of flowers, donations may be made in Joan’s honor to:
Frances Loren
Philani Fund USA
33 Sergeant Street
Princeton, NJ 08540-5366
philanifundusa.org