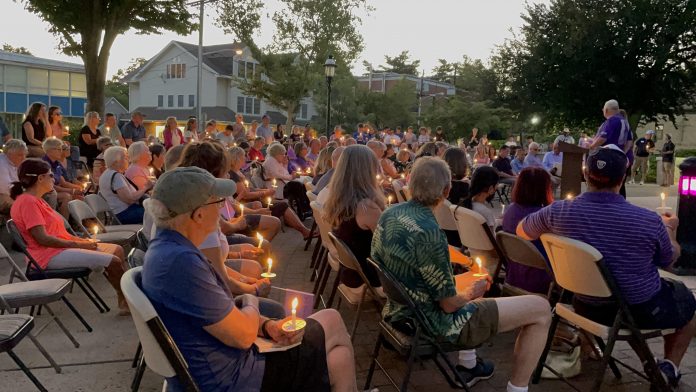 METUCHEN – If anything, the crowd that gathered outside Metuchen Borough Hall was a telling sign that society is making strides to “breaking the stigma” on substance abuse disorders.

However, those in the “breaking the stigma” fight, will say the “fight and effort” is still in full swing.

Vitale said to “break the stigma,” it’s about “prevention, treatment and recovery.”

The Metuchen Municipal Alliance Committee led by Carol Vokland and Katherine Liss, hosted a candlelight vigil in memory of all who have died from a substance abuse disorder on Aug. 31. The Metuchen community joined communities around the world in recognition of International Overdose Awareness Day.

This was the first vigil held in Metuchen. The theme of the event was “Breaking the Stigma.”

Alliance members said, “by recognizing the problem and its consequences without judgment, we can fight the isolation and devastation that go hand and hand with addiction.”

Busch said, with the first vigil in Metuchen, it shows three things.

“We are acknowledging that there is a stigma here and we need to lift that stigma,” he said. “We’re appreciating the sorrow, the sadness, the horrific experience that families go through of helping someone with an addiction. And we’re stimulating a discussion. ‘What could be done going forward?’ ‘How can we help each other and those in our community in the future?'”

Busch spoke about Len Bias, who was destined for a great career in the NBA after his time at the University of Maryland. In 1986, Bias had been selected in the first round of the NBA draft by the Boston Celtics. However, two days after, he had died of a cocaine overdose on his college campus. He was 22.

The mayor, who arrived on the University of Maryland campus a decade later, said no one spoke about Bias’ tragic death.

“There was no discussion, no acknowledgment,” he said. “It was, in many ways, seen at the time as a moment of shame on the University. I always had trouble with that because at the end of the day, what did you really learn from Len Bias other than putting some sort of stigma on it.”

This year, the University of Maryland took steps in “breaking the stigma” and retired Bias’ jersey number No. 34.

Featured speaker Paul Ressler spoke about his son, Corey, who died of an overdose in 2010.

“I’ve been at this since 1999 when I discovered that my son, Corey, at the age of 12 years old, was messing around with drugs,” he said. “You know my first thought was, ‘How could that be?’ … ‘How could that be that my beautiful son Corey was using drugs?'”

Ressler said the family tried everything to help Corey.

Ressler said “breaking the stigma” fight helped classify drug addiction as a chronic disease, not a criminal activity. The fight led to the Overdose Prevention Act in 2013.

The Overdose Prevention Act is intended to save lives by encouraging people to seek medical assistance whenever a drug overdose occurs. It does so by providing that those who, in good faith, seek medical assistance for an overdose victim will be immune from arrest and prosecution on a charge of use or simple possession of illegal drugs. The immunity also applies to the person suffering the overdose, according to the Act.

“It was the first step in providing guidance to people [suffering from a drug addiction],” he said.

Ressler called on members of the Metuchen football team, who attended the vigil in their uniform jerseys, to not give in to opioids even when hurt. Tylenol and Advil are sufficient alternatives, he said.

Nationally, there were over 100,000 overdose deaths during the 12-month period from April 2020 through March 2021, an increase of nearly 30% from the year before, according to the Metuchen Municipal Alliance.

“The numbers have continued to increase for the year ending March 2022. In addition, an estimated 95,000 people die annually from alcohol-related causes. And while these are national statistics, they play out in Metuchen and in other communities as deep, personal tragedies,” Alliance members said.

During the event, the public received a candle to light. Many said the names of people that they knew who were suffering or had died from the disease.

Addiction specialists, information, and literature were available at the conclusion of the event.