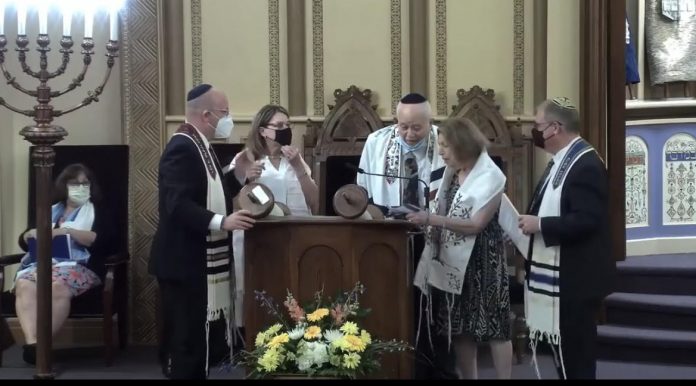 NORTH BRUNSWICK – Thirty years ago, Howard Rossman celebrated his father as he received his second bar mitzvah when he was 83 years old.

It stuck with him all that time.

“I thought it was nice,” Rossman recalled.

Fast forward 30 years later, Rossman and his wife Carol, now both 83, decided to have a bar and bat mitzvah celebration for the second time with support from their congregation at Anshe Emeth Memorial Temple in New Brunswick in July.

Carol said she and Howard grew up and went to school together in Passaic.

“We were friends, then we moved away to college,” she said. “When we got back, we reconnected.”

Carol said she had bought a Singer sewing machine and traveled to a local fabric shop in downtown Passaic to gather some material. The woman, who worked in the store, happened to be Howard’s mom.

She joked that a Singer sewing machine should have an advertisement.

“If you buy a machine from us, you’ll get a husband,” she said. Her comments brought laughter from family and friends during the ceremony.

The Rossman’s went on to marry, which came with approval from her grandfather with champagne he had saved for a special occasion, and they raised four boys.

“It was a trip. ‘Wow,'” Carol said, as she reminisced when their boys were young. “Four boys in the house. There was always something going on. A lot of sports, [and] a lot of dirty clothes on the floor, but it was fun. We loved it. We always tried to have Shabbat dinners on Friday night.”

As their sons grew up, the Shabbat dinners were replaced with Friday night baseball games and dinner consisted of pizza at Ninos.

“Good times, we had really good times,” she said.

Carol said their family is blessed beyond belief.

Dignitaries recognized the Rossman’s as they celebrated their 70th anniversary of their B’nai Mitzvots.

U.S. Sen. Cory A. Booker (D-NJ) requested a flag to fly over the United States Capitol to commemorate the couple’s 70th anniversary.