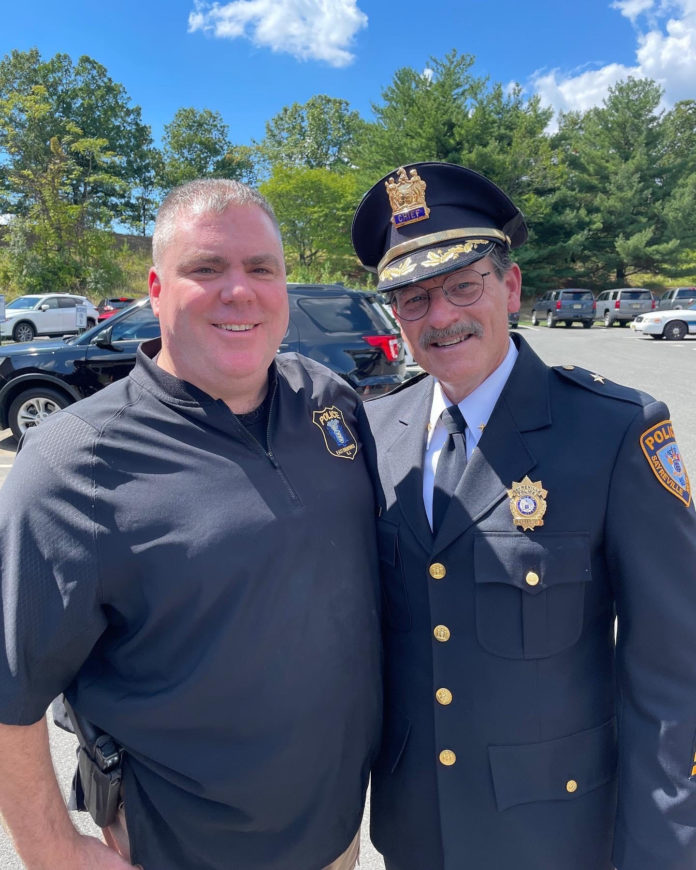 SAYREVILLE – Sayreville’s top cop reflected on his “second family” before he retired in August.

A ceremony recognizing the retirement of Police Chief John Zebrowski was held on Aug. 31. Zebrowski joined the police department in 1988 and was named chief in 2011.

“I’m very lucky,” Zebrowski said. “I have two families. I have my natural family, who I’m very proud of, and this [police] family. Thirty-five years ago, I loaded into a [Chevrolet] Suburban [with] four other guys at 4:30 in the morning. No idea what to expect, unsure about ourselves and unsure about our future. And look what happened. The reason for that is those four people became my closest friends and [remain] my closest friends to today.

“As I moved up the line and I began to work with more people in my squad and my unit, they became my family as well. We attended weddings, graduations, births and funerals. We shared events that would probably shock the conscience of most people. Sometimes, it was just sharing a moment, guidance, a hug or something else just to acknowledge we were there when we experienced that. I take very seriously the family I’m leaving today.

“I appreciate everybody coming today. I thank our community and I thank our members of our police department. God bless Sayreville and God bless the Sayreville Police Department,” Zebrowski said.

Rev. Kenneth Murphy, the pastor of the Saint Stanislaus Kostka Church in Sayreville, delivered an invocation for Zebrowski at the event.

“We gather today to honor Chief Zebrowski as he retires,” Murphy said. “We’ve experienced his service to our community for 35 years and now he goes to a new phase in his life. Let us pray for his welfare and pray his retirement will be enjoyed in the fullness of happiness. We honor John the way that we can, by giving our attention, our affection, our love, our thanks, [while] giving and our best wishes for his retirement.”

“In 1988, the Sayreville Police Department welcomed a young patrol officer to its ranks,” Fitzsimmons said. “The local hometown boy who had grown up in Sayreville, attended schools here, played sports here and participated in the community. A hometown boy who believed in giving back to the very same community that supported him, educated him and afforded him the tools and the opportunity to achieve success.

“Through hard work and tenacity, the young patrol officer earned assignment to the detective division and soon found himself rising in the ranks, earning promotions to supervisory positions. These promotions reached their apex in 2011. The Borough of Sayreville proudly announced its newest leader of the police department, Chief John Zebrowski.

“During his tenure, Chief Zebrowski faithfully led his family of officers as the department navigated its way through periods of high success, as well as through trials and tribulations. It is impossible to detail every achievement of a man’s 35-year career, but I will try to share some of Chief Zebrowksi’s highlights and outstanding achievements,” Fitzsimmons said.

The captain praised Zebrowski for his leadership during Hurricane Irene in 2011, Superstorm Sandy in 2012, the football hazing scandal at SWMHS in 2014 and the coronavirus pandemic in 2020. He also credited Zebrowski with ensuring the Sayreville Police Department received accreditation as a police agency in 2014, re-accreditation in 2018 and “envisioning and implementing internal transitions and enhancements” within the department.

Zebrowski is a lifelong resident of Sayreville and a graduate of Sayreville War Memorial High School (SWMHS), according to his police biography. In 2021, he became the president of the Middlesex County Chiefs of Police Association.

Along with his service to the department, Fitzsimmons noted Zebrowski’s dedication to various organizations, including the Saint Peter’s Opioid Task Force.

“For all these achievements and more, we today honor Chief John Zebrowski as he closes this chapter in his life, preparing for the next great adventure that awaits him and his family,” he said. “Chief, as you depart police headquarters, command having been turned over, entrusting that a new generation of officers will continue the proud legacy of this department. I thank you for your job well done.”

For his final act as police chief, Zebrowski made his final radio call-out with his son.