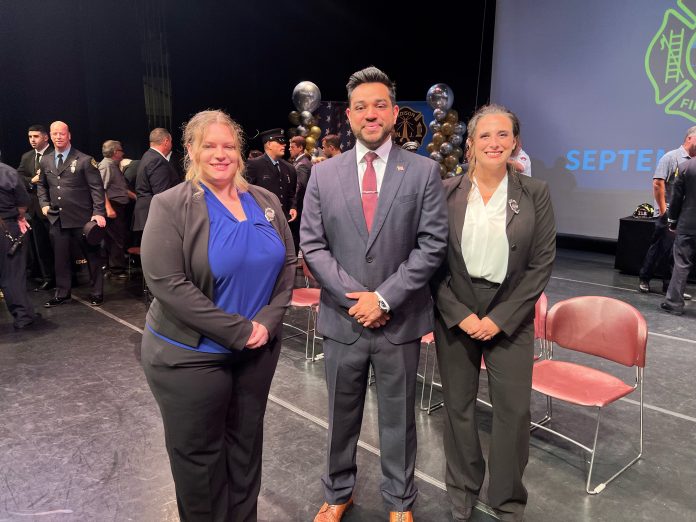 EDISON – It was a historic moment as Edison Township not only hired its largest class of firefighters, but also its first two female firefighters.

“We want to make sure Edison is safe and also an inclusive community and that’s what we’re striving for every day,” Mayor Sam Joshi said.

The swearing-in for the class of 15 firefighters was held on Sept. 1 at Middlesex College.

Stephanie Kirkpatrick and Cynthia Lewitter were sworn in as the first female firefighters in Edison Fire Department’s history, according to township officials in a press release on Sept. 1.

“I am so happy,” Kirkpatrick said at the ceremony. “This is a great town and a great place to start my career. I’m proud to be one of the first female firefighters in Edison but at the same time, I want to just be an Edison firefighter. Period.”

Lewitter said she was “so excited and a little overwhelmed.”

“I worked hard for this, and I know I will continue to work hard every day,” she said.

The women join 13 others in the newly hired class who underwent rigorous training and testing before qualifying for the role. Two others, John Sacchi and Marcell Smith, were previously sworn in earlier this year.

As director of public safety, Joshi said he wanted to make sure they hire the best for the township.

“I had the opportunity to speak to all the new hires,” he said. “I met with them individually and got to know them a little bit and it’s wonderful to hear their stories.

“I asked, ‘What made you want to be a firefighter?’ And most of them said, ‘Ever since I was six years old, ever since I was five years old.’ It was very endearing because these are individuals who are so passionate about their jobs. That is what we need to protect Edison Township. That’s the kind of integrity, that’s the kind of person that you would want as a firefighter in Edison Township. And I’m confident that this is the best group of firefighters we can have.”

Joshi said he developed immense respect for those on the front lines after working as a police dispatcher 11 years ago.

The ceremony comes as Joshi’s administration seeks to bolster Edison’s Public Safety staff while reducing overall costs to taxpayers. He said his administration has made significant changes in public safety since he came into office in January.

“We decided we were going to have three firefighters put on a ladder,” he said. “That was significant because I want to make sure that not only Edison Township is safe, but our firefighters as well. That was a big moment because now we have a fully staffed fire department and along with that, we had to bring the numbers up.”

Along with the new class, the township has hired a total of 27 firefighters this year.

Deputy Fire Chief Andy Toth spoke about what drove him to public service. He said there’s always a flame that is inside that’s always going to burn. He welcomed the new hires into the Edison fire family and told them to “keep the flame burning in their hearts.”

Here are the names of those promoted and newly hired:

Previously sworn in on March 3:  John Sacchi and Marcell Smith.