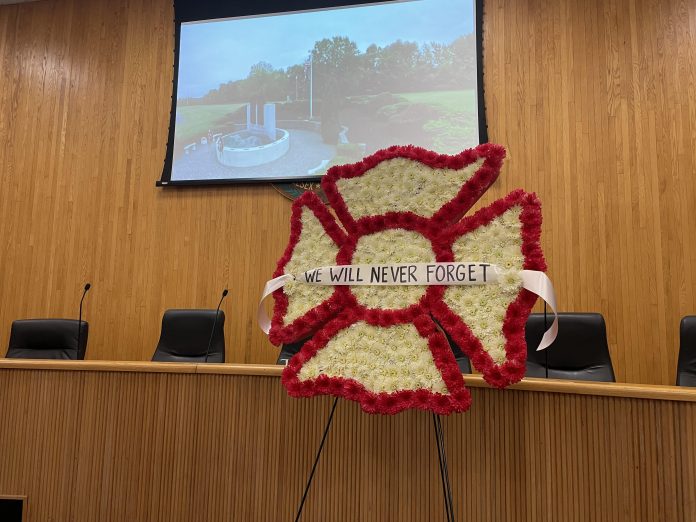 Police Chief Thomas Bryan, who was an officer in Internal Affairs at the time with the Edison Police Department (EPD), was talking to a friend on his way to work.

Council Vice President Joyce Ship-Freeman was working at a school.

Councilwoman Margot Harris was heading to a routine dentist appointment.

Councilman John Poyner was a sophomore in high school sitting in class.

Mayor Sam Joshi was a seventh grader in middle school sitting in class.

U.S. Congressman Frank Pallone (D-NJ) was on the floor of the House of Representatives in Washington D.C.

Bryan served as the keynote speaker.

He told the crowd he along with another officer was tasked to reach out to the 20-plus schools in Edison and prepare principals and school administrators for what may happen.

“No officer or chief ever wants to have to instill the anxiety and fear into school administrators [that was made that day], but that job had to be done,” Bryan said.

The chief said they made sure the 1,000-plus children made it home safely that day. Unfortunately, for one of the students, she lost her father, Brian E. Martineau, Bryan said.

Chelsea Martineau and her family attended the ceremony along with Kevin S. Cohen’s family.

“(The officers) spent a lot of time there walking through the streets,” he said. “When they came back and told the story of the dust and soot walking through, they said it was like a ghost town.”

He noted some of the officers, who were part of the response team, are experiencing health problems to this day.

As everyone reflects on the tragedies, Bryan said it’s important to never forget and remember the empathy and how the country united.

“We need to pause, look back and take a look at the big picture and think about why we are all here,” he said. “We’re here to help each other be the best we can be no matter what.”

Harris said after the terrorist attacks, she came to realize that “terrorism and evil does not come in any one religion or any one nationality.”

“Terrorism and evil are just amongst us in human beings so this is where unity comes in,” she said. “If we can just come together in ordinary times, we can overcome and we can beat evil.”

Joshi said it’s important to remember the terrorists failed to dismantle the freedoms of the U.S.

And while “there are individuals who live in that hateful mindset that choose to challenge us,” Joshi said the “rally and support” shown after the terrorist attacks has to be shown on a daily basis.