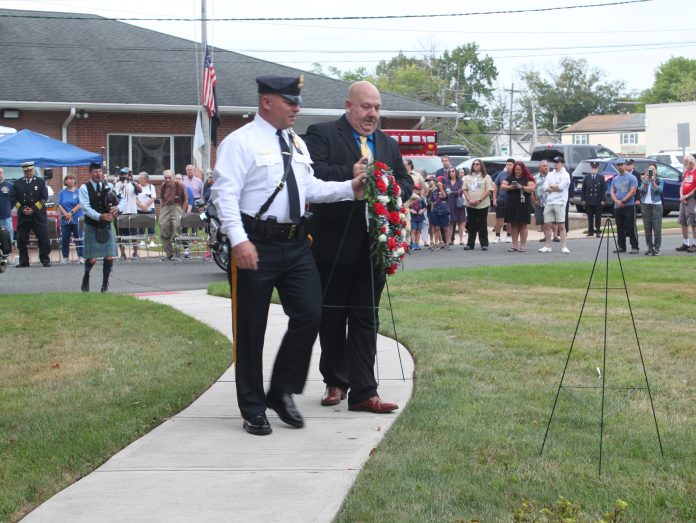 One of Thomas Brophy’s most enduring memories of the Sept. 11, 2001 terror attacks is the pile of shoes and the dozens of Policemen’s Benevolent Association cards that he sorted through at the Fresh Kills landfill on Staten Island, N.Y.

As the keynote speaker at Lawrence Township’s annual Sept. 11 memorial service, Brophy shared his memories of the terror attacks on a cloudy morning 21 years to the day after four coordinated plane crashes killed nearly 3,000 people.

Brophy, who is a Lawrence Township volunteer firefighter, said he was at home watching his 2-year-old daughter when his wife called him and told him to turn on the TV. He said he watched “in horror” at what had occurred. A jet airplane had crashed into the North Tower at the World Trade Center and then a few minutes later, another jet crashed into the South Tower.

It was clear that the crashes, which included jets that crashed into the Pentagon and into a field in Pennsylvania, were not coincidental, said Brophy, who is also a retired Trenton Police Department detective. There was little that he could do – until he responded to a call for volunteers to help recover evidence, he said.

“On Oct. 21, 2001, I answered the call. I volunteered to go to the Fresh Kills landfill to assist in recovering anything of evidence. I remember getting on the bus at the Trenton Police Department. There were 50 of us on the bus. It was silence the whole way up (to the landfill),” he said.

At the Fresh Kills landfill, the volunteers were divided into two groups, Brophy said. He was assigned to the debris field group. He was given a Tyvek suit, a respirator and a helmet, and told to pick through the debris for anything of evidential value.

“I remember there were shoes. There were a lot of shoes. I didn’t know if they were from somebody that was in those shoes prior to the tragedy. I remember Policemen’s Benevolent Association (PBA) cards, lots of them. I knew they were fellow police officers that died that day,” he said.

Brophy said he examined the debris all morning but didn’t find anything worthwhile. At lunch, they were decontaminated, and Red Cross volunteers fed them. Then, they went back into the debris field.

Years later, some of the volunteers and first responders have died of documented 9/11-related illnesses, Brophy said. Among those who died was another police detective named “Thomas Brophy,” he said. He discovered the New York City Police Department (NYPD) detective while making a casual search online for “Thomas Brophy” to find out what was online about himself.

“He died doing what he loved,” Brophy said of his NYPD counterpart.

Wrapping up his remarks, Brophy called on the attendees to look to their left and to look to their right to the police officers, firefighters and emergency medical technicians. He told them to look at their neighbors and at themselves.

“Many people answered the call that day. There were civilians who were probably in those towers helping their fellow ‘man’ to get away from the fire. We will never know what they did. We only know the stories of people that are able to tell us,” Brophy said.

“I hope every one of you can look at yourself, and if your fellow ‘man’ needs that help, you’ll answer that call.”

After a moment of silence, Brophy and Lawrence Township Police Chief Chris Longo placed one of four wreaths on a stand at the entrance to the Lawrence Township 9/11 Memorial Park – one for each of the sites where the terrorists crashed the four jets.