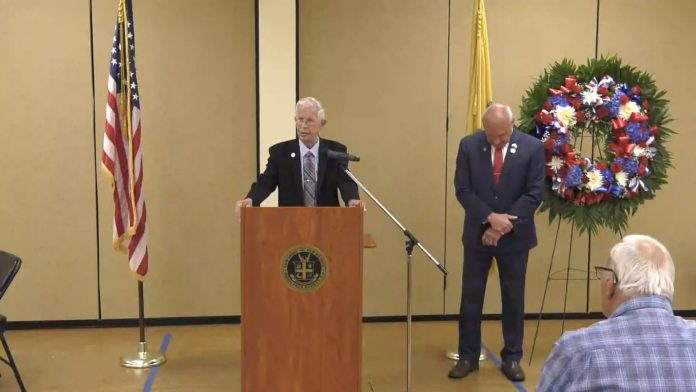 OLD BRIDGE – With moments of silence and reflection, the township commemorated the events of Sept. 11, 2001.

“Twenty-one years ago, our nation was attacked by those who sought to end our freedom and our way of life,” Mayor Owen Henry said. “Many men and woman earned a title of hero that day. In New York, at the Pentagon [in Washington D.C.] and in the skies over Pennsylvania.

“Every day we must reaffirm our commitment to never forget their courage and acts of bravery. Many thousands were touched by the loss of family and friends on that day. The pain and suffering continues today. We continue here in Old Bridge to hold our local victims and their loved ones in our thoughts and prayers.”

“We recognize our obligation to honor them along with the responsibility to make sure justice and freedom prevail,” Henry said. “Today we honor and remember the victims of Sept. 11. The civilians killed in the attacks. The firefighters, the rescue personnel, law enforcement officers who gave their lives to save others. Let us honor all men and woman of our armed forces who have died in the war against terror and pray for the safety of those who continue to put themselves in harm’s way to protect us from another vicious and horrific attack.”

“Our President [Franklin D. Roosevelt] said, ‘This will be a day that will live in infamy, and we’ll never forget,'” he said. “So too are his words so appropriate as we again commemorate Sept. 11.

“We lost so many loved ones in such tragic events but there was one good thing that came out of it, the unity. Everybody was united and stood together in memory of the sacrifices made by our citizens.”

Assemblyman Robert Clifton (R-12) said his day on Sept. 11 has started at Mount Mitchell in Atlantic Highlands for the 9/11 ceremony in Monmouth County for the past two decades.

Over the years, he’s noticed the children, who lost parents at the time, are now grown and even have children of their own.

“They bring those children there to see a name of a grandparent, an aunt or a parent,” Clifton said. “It’s just so moving and so remarkable. On that day Sept. 11, we saw the worst in humanity and hours later we saw the best of humanity.

“As [Rev. Kevin Davis, of Simpson United Methodist Church] said, we have to live every day like Sept. 12 [2001] when we came together, when we sacrificed for everyone, when we had everyone’s back. We need to get back to that.

“And going forward as Sam talked about Dec. 7, 1941, from my generation Sept. 11 is our Pearl Harbor. It is our unifying event, and we must never forget. We must come together every year, we must sit with the family members and be with them as they remember their loved ones and be there to support them and wish them the best,” Clifton said.

And as Council President Mary Sohor and Ward 1 Councilman Kevin Garcia read the names of the 15 township residents who were lost during the attacks, family members, who attended, were presented flowers to place at the township 9/11 memorial outside the municipal complex.