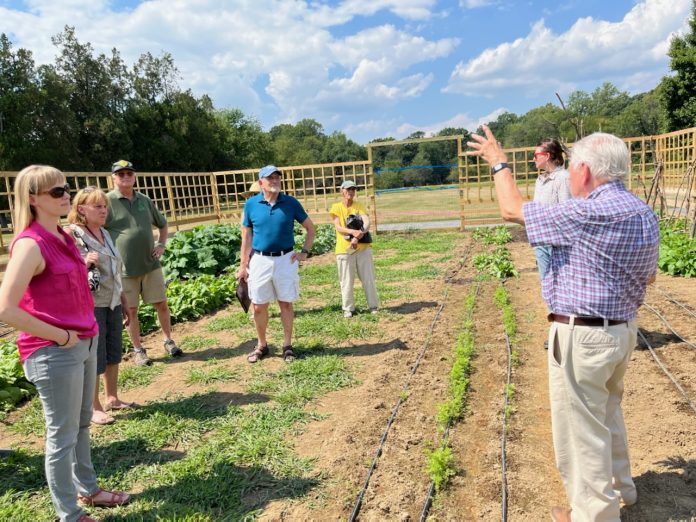 Standing on the plot of land once owned by Joseph Bonaparte — former King of Naples and Spain and brother of Napoleon – garden steward Lara Periard shares her enthusiasm for developing the Point Breeze Historic Garden.

“This project is unique for several reasons,” Periard said. “Unlike a standard vegetable garden or farm, its purpose is to represent the history of the land, as well as to grow food for donation to the community. We are growing historic crops, primarily what would’ve been grown by Bonaparte’s gardener at the time.”

The first planting includes carrots, fennel, parsnips, beans, beets, squash, turnips, kale, radishes and cabbage. Volunteers have also planted flowers, lavender, and blueberries by the house, according to a press release through the D&R Greenway.

Connecting visitors and local residents to the land and to each other is another reason for Periard’s enthusiasm. D&R Greenway’s Garden and the adjacent gardener’s house are part of the 60 acres that were permanently preserved in December 2020 by the land trust in partnership with the State of New Jersey and City of Bordentown.

The inaugural tour will begin at 2 p.m. and will last for an hour as participants learn about the vision and elements of the garden. Led by Mead and gardener Periard, the free event is open to the public with pre-registration available at drgreenway.org or info@drgreenway.org.

The event serves as the kick-off for Garden to Bistro Month in Bordentown. At the event, Bordentown restaurants participating as founding sponsors of the Historic Garden, will be recognized. Throughout the month of October, sponsoring restaurants will receive a harvest bounty of historically-significant produce to be featured on their menu, allowing patrons to enjoy a taste of history.

The intent of the garden is to restore an historic landscape that benefits today’s community. Just after Labor Day, the first harvest – a crate of summer squash and radishes – was donated to Christ Church in the City of Bordentown to distribute to people in need, according to the press release.

Father Matt Tucker and his wife, Doan Huỳnh Tucker said they are “grateful for the donation of local produce planted and harvested by D&R Greenway Land Trust at the historic vegetable garden at the newly-preserved Point Breeze in Bordentown” and will be shared with the community.

“If you’ve driven by the property on Park Street this summer, you may have noticed changes to the historic site, from removal of a non-native hedge that obscured the view of the house, to an attractive wooden fence that houses the garden,” Mead said. “We’ll share how the landscape and garden were modeled on historic photos and maps and what you can expect to see when our Discovery Center at Point Breeze opens in the former Bonaparte gardener’s house this fall.”

Bordentown was a choice location for Bonaparte’s estate because of the rich soil for gardening, its proximity to ground and water transportation via the Delaware River, and the land’s natural beauty, according to the press release.

“I worked on designing the crop plan to have visual interest, grouping crops by family, and designing the layout of crops by height, so when you look at the garden from the front, you will see the heights of crops ascending, and you will see blocks of crops with varied textures,” Periard said. “The carrot family is very frond-like. Squashes grow big and bushy, and beans are grown on climbing trellises.”

The wooden fence enclosing the garden is designed with beauty and utility in mind.  Its lattice framework allows visitors to see into the garden while keeping deer and rabbits out. D&R Greenway’s land and property steward David Seiler built the wooden fence modeled after a vegetable and herb garden on the Robert Todd Lincoln home in Manchester, Vt. The hand-forged ironwork on the gates came from England, according to the press release.

Periard and local resident Val Sassaman, a member of the Bordentown Historical Society, researched the garden seeds that would have been used in Bonaparte’s time, and D&R Greenway purchased some of the seeds from Monticello, Jefferson’s estate in Charlottesville, Va.

“We’re also growing some heirloom beans and squash, and next year we’ll grow some corn varieties that are native and significant to the Lenni-Lenape people, whose ancestral homelands we’re planting on. The Indigenous name in this area is Lenapehoking,” Periard said.

The garden was an important element of Bonaparte’s estate because its harvest was used to feed his family and guests, which included political and military figures, artists, and business owners. The Bordentown Historical Society mentions a few visitors, including Henry Clay, Daniel Webster, and John Quincy Adams.

Bill Flemer, recently retired site manager of D&R Greenway’s St. Michaels Farm Preserve in Hopewell and a member of the Princeton Nurseries family, tilled the garden plot, transforming it from grass to create a footprint for the first planting. Flemer’s cousin, Rebecca, with a master’s degree in historic preservation from the University of Pennsylvania, contributes her knowledge from her work with historic gardens in Philadelphia and in Europe to the Point Breeze project as a member of the Advisory Committee.

Anthropology professor Dr. Richard Veit has contributed to the knowledge base of Bonaparte’s life and times based on archaeological findings from his recent dig at the gardener’s house. Doug Kiovsky from the Bordentown Historical Society contributed images of the estate.

While great progress has been made, Mead said there is much more to come soon.

“There is an opportunity for people to share their love of history and gardening by volunteering to help with the harvest season. As we prepare to open the former gardener’s house to the community this fall, we invite people to sign up to become docents and help tell the stories of this land.”

“If people feel a relationship with the land, then they care for the land,” Periard said. “That’s my hope, that in connecting to the history of this place, from the Lenni-Lenape people who were here first, to Bonaparte’s time, to the present, people will feel a relationship to this area and ecosystem and be inspired to become, or continue to be, active in supporting conservation and restoration efforts.”

To learn more about the Point Breeze Historic Garden and ways to volunteer, contact Lara Periard at lperiard@drgreenway.org.