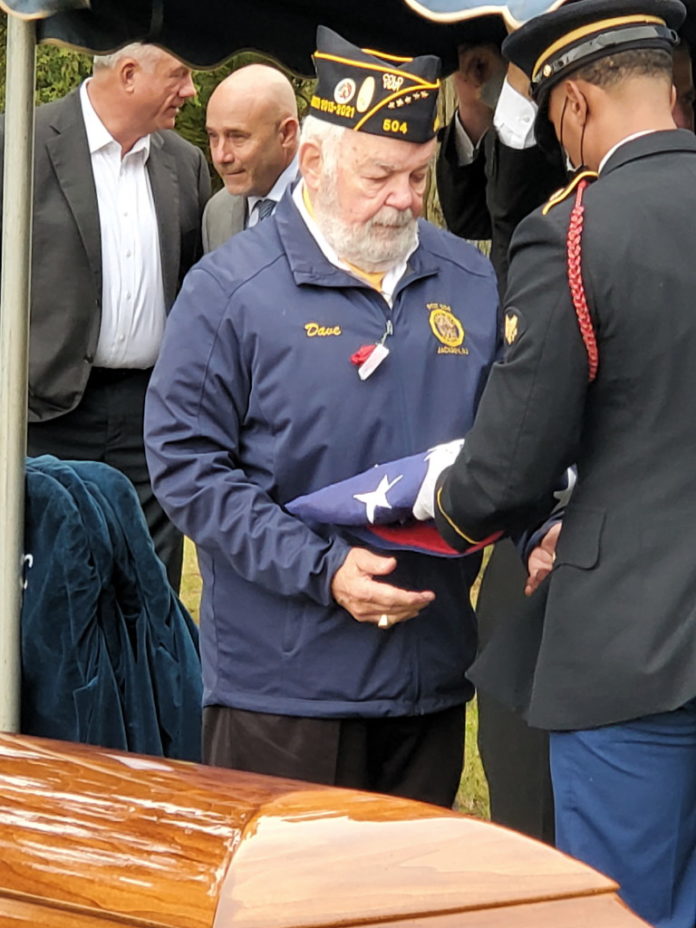 JACKSON – The members of American Legion Post 504 in Jackson are seeking reinforcements with the hope of recruiting individuals who will help keep the post’s programs for local veterans running.

“We are looking for veterans to join our group who have served their country in Iraq and Afghanistan and the other conflicts since the Vietnam War ended,” Post Commander Barry J. Kakos said.

“One of our biggest challenges is to recruit the younger veterans in Jackson and local communities. They will be the ones who will continue the foundation that has been laid by our current and former members,” he said.

“Veterans Helping Veterans” is a fitting motto for Post 504, whose members have
served in all five branches of the nation’s military, according to Kakos, who served in
the U.S. Army from 1969-71.

“Our post started in 1971 when a few guys got together and decided we needed to
do something in our town for veterans,” he said. “Our Veterans of Foreign Wars
post was here, but (to join) you had to have served overseas.”

American Legion Post 504, which has 207 members, meets on the second Wednesday of each month at 7 p.m. at the Knights of Columbus Hall, 401 Bartley Road.

“A lot of our guys were stateside, they are Vietnam era veterans who did as much for
this country as those who went overseas and fought the wars or were stationed
overseas,” Kakos said.

According to Kakos, the American Legion post and the Knights of Columbus have a good working relationship and collaborate on many community events.

Kakos said, “We want (the American Legion’s) mission of involvement in the community and taking care of veterans to continue and if we don’t get new folks to join it will eventually fade away. We are looking to recruit new members. Ours is one of the more active posts in Ocean County.”

In addition, the post sponsors four scholarships for Jackson high school students
and plans are being finalized to hold a Run for Veterans on Nov. 8 at the Christa McAuliffe Middle School.

The post’s color guard participates in local events and parades, and is active at community events held on Veterans Day (Nov. 11).

“If available, we honor all requests,” Kakos said.

Kakos said he wants to dispel the notion the American Legion is exclusively a men’s
organization.

“That is certainly not the case. Our post is proud to have six women among our ranks of veteran comrades. Our post chaplain is a female Army veteran,” he said.

According to Kakos, the goal for the members of American Legion Post 504 is to grow the membership.

“Out goal is getting up to 225 members. We are recruiting and seeking younger veterans. Most of our members are in their 70’s and 80’s. Every month or so we add a new member. That’s good, but for every three or four members we gain, we have lost one,” he said.

To be eligible to join the American Legion post, prospective members must have served at least one day of active duty.

“We have one member left from World War II, nine from the Korean War, the vast majority of vets are from the Vietnam era. We have some Cold War service members, probably 10 or so since Vietnam, Lebanon, Grenada and the Cuban crisis. The American Legion currently has 1.6 million members nationally and some 38,000 in New Jersey,” Kakos said.

Kakos, who joined the military during the Vietnam era, said the core mission of the American Legion is service to veterans.

“We pride ourselves on serving veterans, serving the veterans’ community and youth. Those are our three pillars and that is what we focus on – veterans. We do a lot,” he said, noting that proceeds from fundraisers help fund programs for veterans.

Among these programs is a poignant mission to recover thousands of unclaimed cremated remains of veterans that are stored at funeral homes and to provide a proper military burial for the individual.

The members of Post 504 pride themselves on community service. The post sponsors scholarships for college-bound seniors at Jackson Liberty High School and at Jackson Memorial High School.

“We award two ROTC scholarships every year, one for each high school, and we give out an academic scholarship at each high school. We are going to do a Run for Veterans at the McAuliffe middle school Nov. 8. The kids will serve the veterans breakfast in the morning and there will be talks with the students.

“Every November we put flags on the graves of (veterans) in local cemeteries; there are three groups that do it – the U.S. Marines, the American Legion and the Jackson veterans. We go to three cemeteries in Jackson – Cassville, Holman and Pleasant Grove. We put out more than 140 flags, taking the old ones and placing the new ones.

“A Veterans Day service will be held at the Veterans Memorial Garden on County Line
Road on Nov. 11 at 11 a.m. Our color guard will be there,” Kakos said.

“Whenever one of our members passes we check with the family and the funeral
home to ask if they would like to have our service.

“Basically we are looking to increase public awareness of the American Legion and to
continue to be a positive force here in Jackson.

“We are trying to increase our visibility in town because we want our mission of supporting the community and youth and taking care of veterans to continue and if we don’t get new blood, eventually it is going to fade away,” Kakos said.

“Our biggest mission is to reach out to veterans; there are more veterans in Ocean County than in any other county in the state. Jackson being a big part of Ocean County, we have a bunch.

“Our veterans are the No. 1 priority. Our primary purpose is taking care of veterans in any way we can. That includes if they need a wheelchair; if a veteran needs some food we will do that for them or direct them to the Jackson Food Pantry. We even put veterans up in hotels who are having an issue with their housing.

“For veterans, it’s housing, food and medical issues. Some people get post-traumatic stress disorder from their service and we try to guide them and get them some counseling. It’s available through the VA, but they need to be guided,” he said.

“We need to let them know we are here. Our primary mission is serving veterans, community and youth. Our little group does a lot because that’s our mission,” Kakos said.