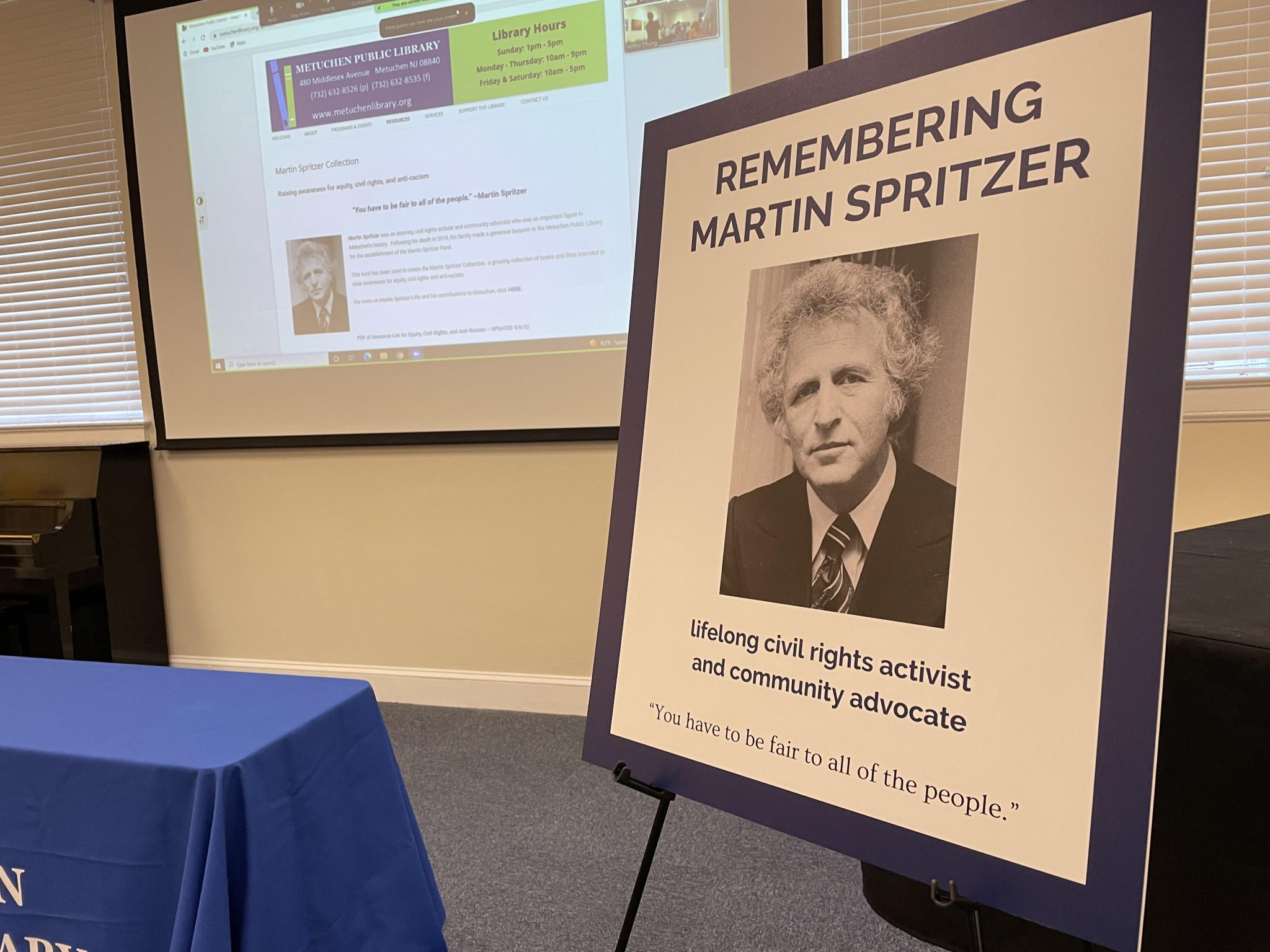 At 92 when it was ultimately his time to go, Spritzer’s son Evan, said he only wanted to talk about two things – “How could there be a legacy for Metuchen, Edison race relations? How could it be extended into the future?”

And second was to reach out to family members, Evan said.

The Metuchen Public Library hosted a special tribute on Sept. 10 to remember Spritzer who served as the borough attorney for 16 years. He made tremendous contributions to improve the race and human relations in the Metuchen community, as well as other counties in the state.

He was a member or chair of over 10 organizations including the Metuchen-Edison Race Relations Counsel and the Middlesex County Human Relations Commission. He was dedicated to the cause of civil rights from the very beginning of his career.

Spritzer passed away in December 2019 in North Carolina.

Hsi Hsi Chung, director of the Metuchen Public Library, said Evan Spritzer contacted her regarding his fathers $5,000 bequest to the library.

With the funds, Chung said they able to enhance the library’s collection and build a special collection in efforts to educate and inform the community about important social issues.

The special collection is filled with items for all ages on the Civil Rights era, social justice and anything related to race or current events.

Each item has a special stamp with the Martin Spritzer Fund: Raising awareness for equity, civil rights and anti-racism. “You have to be fair to all the people.”

“The Metuchen Public Library is committed to support the standards for diversity, equity, accessibility, and inclusion as part of our mission and our vision,” Chung said.

“We are grateful for the work of Marty Spritzer that continues to make [the area a] better place.”

The ceremony speakers included Metuchen’s past and present day. Former Councilwoman Pamela Brown, who was the fourth woman to serve on the Council, served as master of ceremonies.

She read comments from Joyce Wernik, wife of the late former Mayor Don Wernik, Leonard and Gwen Roseman, who were actively involved in the community, Bill Lovett, former CEO of the Metuchen YMCA, to name a few.

Council President Jason Delia said he didn’t know Spritzer personally but being a volunteer and member of the Borough Council, he said, “you get to know the name.”

“It’s not lost on me that Mr. Spritzer’s and others’ fight against racism and equity is directly related to the inclusive and welcoming community that I and my family get to enjoy today,” he said.

Reginald Johnson, president of the Metuchen-Edison NAACP (National Association for the Advancement of Colored People), said under Spritzer’s watch, the Council was successful in breaking down the segregation housing patterns in both Metuchen and Edison.

“Metuchen might be called the ‘Brainy Borough,'” Johnson said. “But it did have a dark side to it.”

In 1990, Johnson and Spritzer became co-chairs of the Middlesex County Human Relations Commission.

“He sent me to the New Brunswick Elks on Winston Avenue in New Brunswick to make a speech on human rights,” he recalled. “Several of the Elks told me that I was at the wrong Elks, that I should be at the Black Elks across town. As I was leaving, Marty was arriving, and I explained to him what happened.

“Not only did I make my speech, but I received a written apology from the Elks.”

Johnson said he later learned that Spritzer threated to have their tax exemption pulled.

From there on, Johnson and Spritzer worked together on numerous cases from the Aryan nation flyers requesting Chinese residents to move back to Japan to the community issues with the growing Asian-Indian population in the Oak Tree Road area.

They created commissions for 21 of the 25 counties, 11 of which still exist today including in Union, Bergen, Somerset and Mercer counties.

“Blessed with a Harvard degree, I know that Martin sacrificed a more lucrative career to fight for the underdog,” Johnson said. “But that is the path he enjoyed. Ironically, the bust outside of this library could have had the name and image of another ‘Martin’ and that is Martin Spritzer, he deserved it.”

Hazel-Anne M. Johnson-Marcus, chair of the Metuchen Human Relations Commission, said they are grateful of the work of Spritzer and will continue making Metuchen a better place.