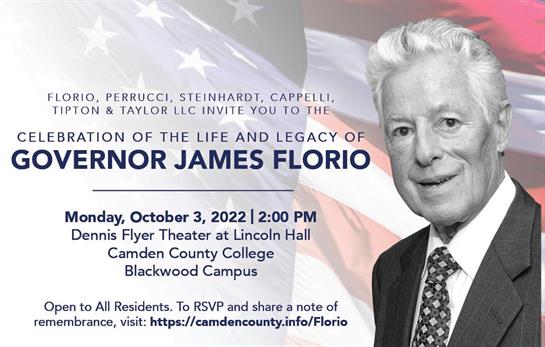 Local dignitaries, leaders remember former Gov. James J. Florio, whose time in office saw a wide variety of initiatives, many of which led to significant changes in New Jersey public policy and governance.

Florio passed away peacefully surrounded by his family on Sept. 25. He was 85.

“Gov. Florio was a fighter who never backed down. He was a leader who cared more about the future of New Jersey than his own political fortunes,” Gov. Phil Murphy said in a statement. “And he was also a friend whose kind counsel was invaluable to me and countless others across our state.

“Our communities are cleaner today because of the environmental efforts he championed in Congress. And our streets are safer today because of his dogged effort to enact and defend our state’s assault-weapons ban, which remains the law to this day. More than anything, Gov. Florio showed that legacies are built by doing the right things.”

On Sept. 26, Murphy ordered U.S. and New Jersey flags fly at half-staff at all state buildings and facilities from sunrise Sept. 27 until sunset on Oct. 11 in recognition and remembrance of the 49th governor.

Florio was born in Brooklyn, N.Y. He received his bachelor’s degree from Trenton State College in 1962 and did graduate work at Columbia University in 1962-1963 before earning a Juris Doctor, J.D., from Rutgers University Law School in Camden and being admitted to the New Jersey bar later that year.

Most recently, he was a working founding partner in the law firm of Florio Perrucci Steinhardt Cappelli Tipton & Taylor LLC.

U.S. Sen. Bob Menendez (D-NJ) said Florio, a “tremendous leader in the state and in the Democratic Party” led with “intellect, passion and dedication for New Jersey’s working families.”

“His work on issues ranging from education, transportation, and the environment has had meaningful impacts on families and communities across the nation. And it’s because of his Superfund Law, which he authored as a congressman, that we are able to clean up hazardous waste sites here in New Jersey and throughout America,” Menendez said.

“I appreciate the many years that I had the privilege to work alongside Gov. Florio. And I know because of his decades of public service, New Jerseyans and Americans will benefit for generations to come.”

New Jersey Department of Environmental Protection Commissioner Shawn M. LaTourette said with the passing of Florio, “New Jersey and the nation have lost a visionary champion for the protection of our environment and public health.”

As a state legislator, congressman, governor, and beyond, Florio fought for and advanced laws that have promoted environmental cleanup and revitalized communities, LaTourette said.

“As a congressman from 1974 to 1990, he rose to the challenges of his times by authoring the federal Superfund law and leading the way in the creation of the Pinelands National Reserve.

“As governor, he continued to rise to the many environmental challenges affecting the Garden State, pushing groundbreaking laws and initiatives to improve the quality of New Jersey’s air and water and to protect our natural resources,” LaTourette said.

Angelo Valente, executive director of the Partnership for a Drug-Free New Jersey, said Florio “played a crucial role in helping companies in New Jersey establish drug-free workplace policies that provide supervisory training, drug testing procedures and, when necessary, ensuring that employers and employees know what to do and where to go for treatment of substance use disorders.”

“Gov. Florio had foresight and vision in establishing ‘Drugs Don’t Work in NJ!’ to help New Jersey businesses be compassionate and competitive; and, for his understanding that the disease of addiction does not discriminate and can impact anyone,” Valente said in a statement.

Florio and his wife Lucinda had called Metuchen home for nearly 25 years after his time in office.

Metuchen Mayor Jonathan Busch said Florio and his wife were the first to welcome his family when they moved into the same neighborhood, in a social media post after Florio’s passing.

“They were always so gracious and caring with us and particularly kind to our children,” he said.

In college and graduate school, Busch spent time studying Florio’s decisions during his time in office because “I was particularly struck by the boldness of his character.”

“A former congressman, assemblyman, Navy veteran, and amateur boxer, Gov. Florio was awarded the prestigious John F. Kennedy Profile in Courage Award in 1993. Upon receipt of the award, he apparently said, ‘The first thing I learned as governor is that you can’t please everybody. The second thing I learned is, some days, you can’t please anybody,'” he said.

In lieu of flowers, donations can be addressed to the Governor James J. Florio Endowed Distinguished Visiting Scholar of Public Policy scholarship fund set up at Rutgers University.

Florio guest lectured many classes and taught public policy for over 20 years. He held the title of Senior Fellow of Public Policy and Administration at Rutgers University’s Edward J. Bloustein Graduate School.