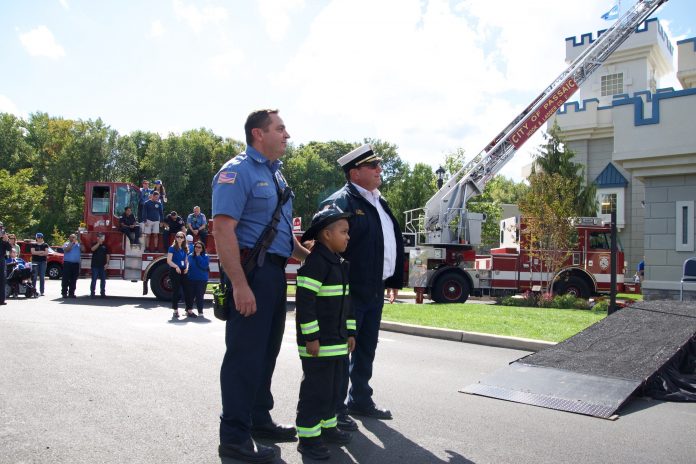 MONROE – Just minutes after being sworn in as New Jersey’s newest firefighter, a 9-year-old Passaic boy has been hailed a hero “rescuing a princess from the balcony of the castle.”

Make-A-Wish New Jersey and over 100 firefighters from departments all throughout the state and beyond came together to grant the wish of Antonio, who is battling a life-threatening medical condition, on Sept. 27, according to a press release through Make-a-Wish New Jersey.

He was completely surprised by a receiving line and ceremony, surrounded by his heroes in the firefighting community, according to the press release.

Antonio was sworn in as a firefighter, his “Make-A-Wish,” in front of his new firefighting family conducted by Make-A-Wish New Jersey President and CEO Tom Weatherall and Passaic Fire Department Chief Patrick Trentacost.

After his swearing in, Antonio was met with a presentation of patches from every department in attendance and he quickly had to put his training skills and patches to the test when he was called to his first call of duty – a princess stuck on a balcony of the castle.

Antonio was hoisted into the sky on a ladder truck up to the castle balcony where he “bravely saved the princess and brought her to safety.”

The Passaic youngster’s wish to be a firefighter holds a special and historic significance in Make-A-Wish history. The founding of Make-A-Wish in 1980 was inspired by first responders when a 7-year-old boy named Chris Greicius, who was battling leukemia, wanted to be a police officer, according to the press release.

Immediately following the founding of Make-A-Wish, the first official wish ever granted was for a 7-year- old boy named Frank “Bopsy” Salazar, also battling leukemia, who wished to be a firefighter. Since its founding and that first wish, over 500,000 children with critical illnesses have experienced the life-changing power of a wish around the world.

Antonio becomes the newest member of the Make-A-Wish family.

Make-A-Wish New Jersey creates life-changing wishes for children with critical illnesses. In the fight against a critical illness, a wish serves as a catalyst for renewed strength and encouragement for every child and family on their journey, according to its website.

A wish helps kids look past their limitations, families overcome anxiety and entire communities experience joy. Most importantly, wishes can improve a child’s quality of life. Make-A-Wish New Jersey was founded in 1983. Serving children in every municipality in the Garden State, Make-A-Wish New Jersey has granted over 11,000 wishes since its inception.