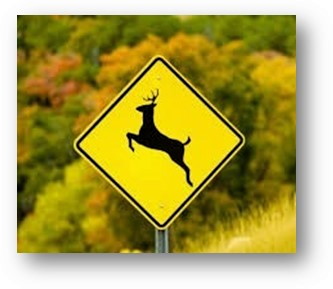 Deer are more likely to suddenly enter roads at this time of year, also known as the fall rut, as bucks pursue does, increasing the risk for drivers to stop suddenly or to be involved in collisions, according to a press release.

Deer activity is more likely to occur during early morning hours and around sunset, when visibility may be limited and more motorists are on their work commutes.

“Deer are involved in thousands of collisions with motor vehicles in New Jersey every year, most of which occur during the fall mating season,” New Jersey Fish and Wildlife Assistant Commissioner David Golden said.

“We urge all drivers to be especially alert to the possibility of deer suddenly darting onto roads, as well as to know how to reduce the risk of a collision and possible serious injury to themselves, their passengers or others,” he said.

Awareness will become even more important when daylight saving time ends at 2 a.m. Nov. 6, according to the press release.

This means many commutes will then align with the time when deer are most active and lighting conditions may be the most difficult for driving.

Reduced lighting as well as sun glare can make it very difficult for drivers to see deer that are about to cross the road, according to the press release.

These tips can help drivers stay safe during peak periods of the annual fall rut:

• Slow down if you see a deer and then watch for sudden movement. If the deer is in the road and does not move, wait for the deer to cross and the road is clear. Do not try to drive around the deer;

• Watch for “Deer Crossing” signs. Drive slower when traveling through areas known to have a high concentration of deer so there is enough time to stop, if necessary;

• Use high beams during dark periods if there is no oncoming traffic or vehicles ahead. High beams will be reflected by the eyes of deer on or near roads. If you see one deer, assume others may be in the area;

• Do not tailgate. The driver ahead might have to stop suddenly to avoid colliding with a deer;

• Always wear a seat belt, as required by law. Drive at a safe and sensible speed, following the speed limit, factoring for weather, available lighting, traffic, curves and other road conditions;

• Do not swerve to avoid impact if a collision appears inevitable; a deer may counter-maneuver suddenly. Brake appropriately and stay in your lane. Collisions are more likely to become fatal when a driver swerves to avoid a deer and instead collides with oncoming traffic or a fixed structure along the road;