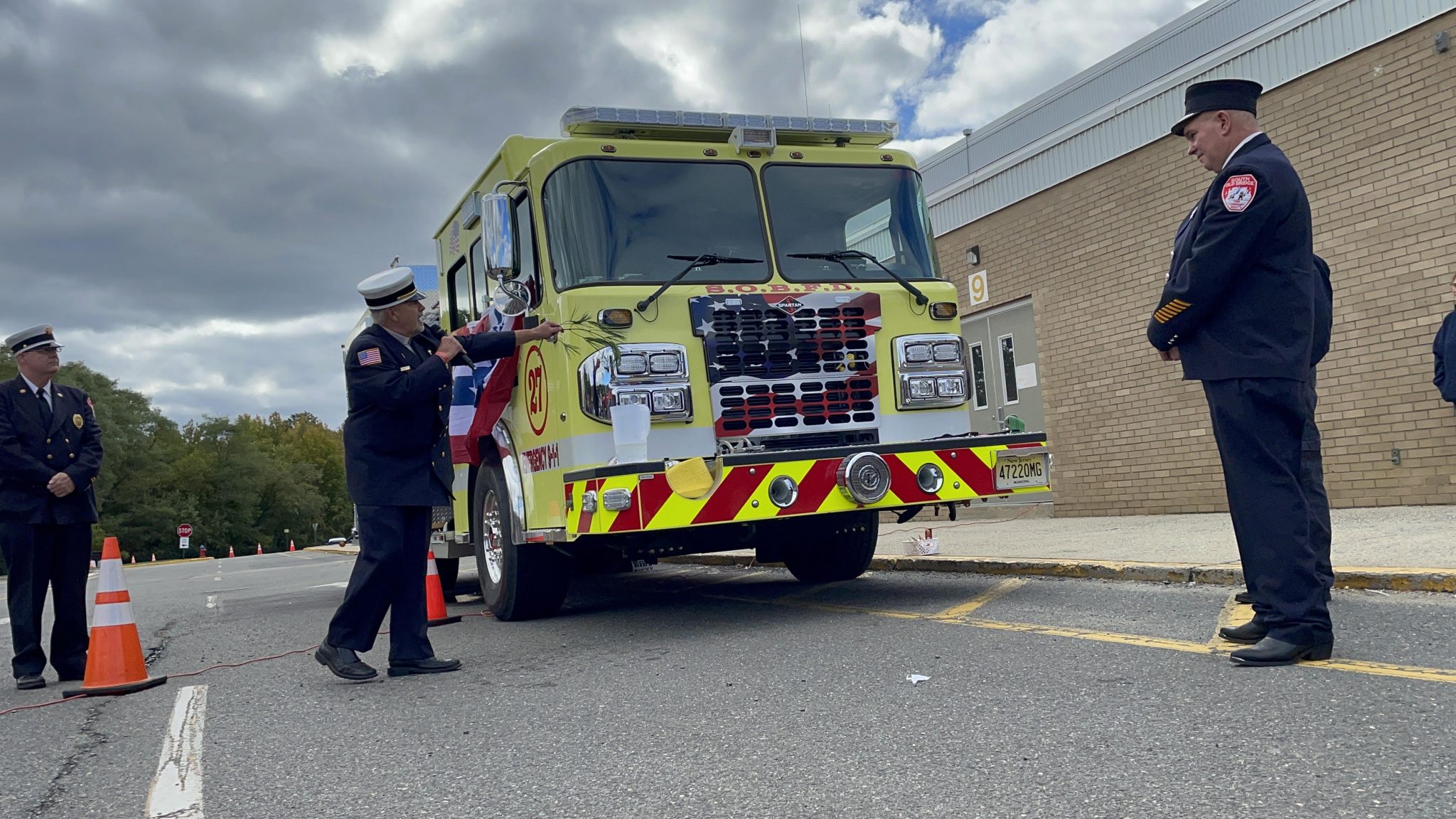 OLD BRIDGE – The South Old Bridge Volunteer Fire Company recognized all the hard work and dedication of its members as it celebrated its 75th anniversary.

“We felt we should have a celebration like this so we can memorialize and remember the ones who made the South Old Bridge Volunteer Fire Company (SOBVFC) into what it is today,” Fire Chief Richard Dunn said.

“The department played a critical role in the development of Old Bridge. We are for the community; we are for brotherhood, and we are for the township as a whole.”

Mayor Owen Henry said the SOBVFC “has been, is, and we hope will continue to be a critical, important … and as the chief said essential to our well-being and safety of the entire community of Old Bridge.”

The celebration was held on Oct. 8 at the Old Bridge High School. It began with an award ceremony.

After the award ceremony, members of the company dedicated and blessed their new fire truck, Engine 327. It was followed by fun family activities including games, face painting and fire prevention demonstrations.

Food trucks and vendors were also on hand at the celebration.

Throughout SOBVFC’s 75 years of “proud and honorable service” to the residents of South Old Bridge, members have always answered the alarm and bravely served the community, Dunn said.

SOBVFC covers over 26 square miles of Old Bridge with 35,000 residents and respond to well over 750 calls a year.

Dunn provided the history of the fire department.

The SOBVFC is a 100% volunteer department responsible for the protection of Fire District No. 3, in Old Bridge.

The department protects an area of approximately 22 square miles with a population of 35,000 residents. The district contains a mix of both commercial and residential occupancies, along with the major highways of Routes 9 and 18.

The department provides fire protection 24 hours a day, 7 days a week to district No. 3 and also responds to calls for mutual aid from neighboring communities.

It was a cold night in November 1947 when a group of men were gathered around a potbellied stove in Beedle’s Garage discussing their short comings and making life miserable for the proprietor.

Suddenly, some of them smelled smoke, at the same time a mighty howl was heard. It seemed that a certain person had been standing with his back too close to the stove. The back of his topcoat had been scorched, instead of the common phrase “hot foot,” he really had a hot seat. Due to the swiftness and efficiency shown in extinguishing the fire they decided, then and there, they were destined to be experts in the field. Thus, the South Old Bridge Volunteer Fire Company Inc. was conceived.

The Company’s first meeting was held at the Willis school in South Old Bridge, then Madison Township, on Nov. 14, 1947. In early 1948 they decided to build a firehouse, Engine Company No. 1, and land was purchased on Appleby Avenue.

The South Old Bridge firehouse was constructed largely by members with some help from local contractors.

In 1962, in keeping with the expansion of the township, the fire company found it necessary to expand its facilities. Land was acquired and Engine Company No. 2 was built on Throckmorton Lane in the Sayrewoods South section.

In 1969 further expansion was needed, and Engine Company No. 3 was established in temporary quarters at Englishtown Road and Van Tines Lane. The permanent firehouse was built on the same site in 1975.