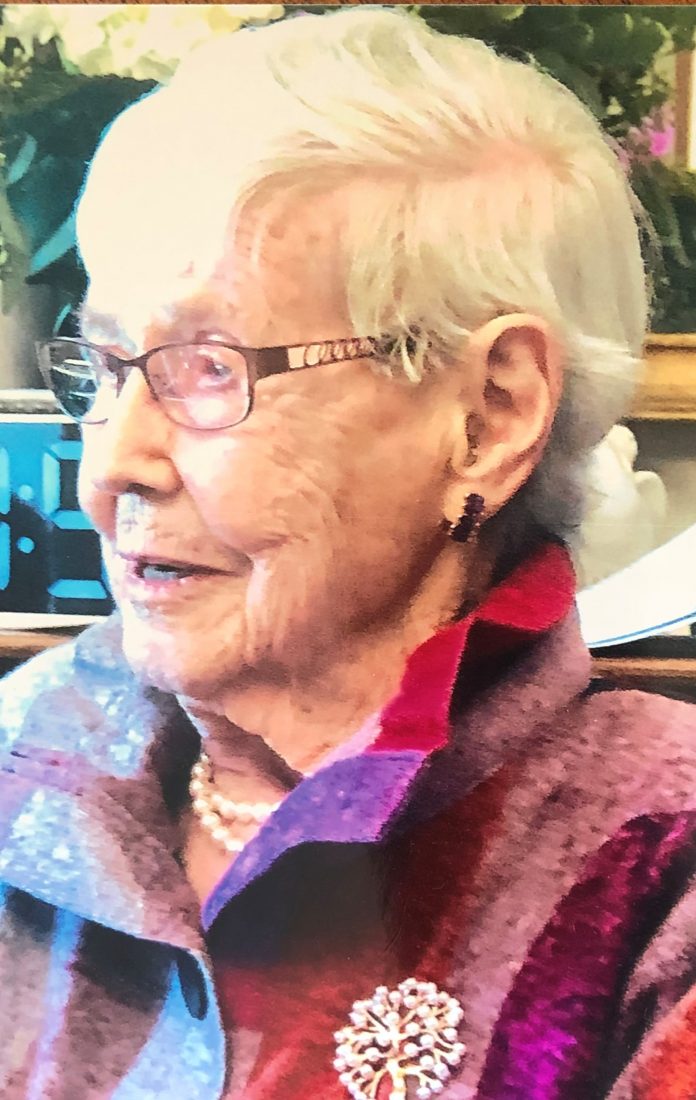 Nancye Alfriend Allen left us in this world on November 9th to join her loving husband Jim, at the wonderful age of 100.

Nancye’s devotion and commitment to the betterment of children: her own, her grandchildren, those she taught and especially those in need were a constant gift to all she impacted.

Mother, teacher, mentor, friend – witty and wry to the very end. Nancye was born in Hebron in rural South Central Virginia in 1922, the third daughter of James Aubrey Allen and Mamie Allen nee Baird. It was a simpler world and a farming life she entered. Her family kept chickens, pigs and a few cows, owned and operated a diesel-powered sawmill deep in the woods and a local country store that doubled as a mail stop on the Norfolk and Western railroad tracks that ran by their lane with occasional haunting whistles. As a family they attended the small Presbyterian church ministered by Reverend Hugh Fitzpatrick; who would later marry Nancye to his son Jim, a childhood friend since the age of six.

When that local boy, at the age of seventeen, enlisted, went off to war as a bomber pilot and became a prisoner of war, Nancy started writing letters to him hoping it would help him survive his days of captivity. Little did she imagine that Jim would become her husband and life partner for sixty-six years.

When Jim returned from Germany, Nancye was teaching High School in Virginia. Over the next few years, he asked her three times to accept his proposal for marriage, and as we know three times is the charm, so they married in 1950. Rural Virginia was soon left behind for the canyon walls of New York City. Nancye bore her first two children on the Upper west side – Karen 1951 and Hugh 1952- before relocating to Princeton, NJ in 1953; chosen so they could raise a family in a college town. They soon built a home in a field on Rosedale Road. 1954 saw her second son Allen arrive and in 1959 her third son Dudley. All of her children carry her maiden name and all feel their deep roots in Hebron soil.

Nancye was the consummate mother. Fierce to defend, clear with moral lessons, quick to console and hug, and always cooking up a storm. It was a well fed, busy, and safe household but if you ever sneaked the cookie jar, she had eyes in the back of her head!

Once her children were off to school, it was time for Nancye to return to teaching: grammar lessons at the kitchen table were no longer enough. Her college years at Longwood State Teachers College and her early teaching positions in Virginia placed her in a long line of family teachers including her mother Mamie, who taught in a one room schoolhouse (often to boys who were older than she), and her two sisters Mary Dudley and Louise, who were also teachers in Virginia. She restarted her career in New Jersey, first as a substitute in the Princeton school system, then full time in the newly built John Witherspoon Middle School. She had a great run there; her students loved her for her support and her ability to challenge them at their level – she wanted the best from all and for all.

Nancye always had a soft spot in her heart for those in need. She served for many years on the Board of the New Grange School. She mentored and tutored in the Trenton After School Program and supported the Princeton YMCA, The Trenton Children’s Chorus, Centurion Ministries and was an elder at Nassau Presbyterian Church.

Later years were spent traveling with Jim on business as they visited clients, researched companies and attended conferences worldwide. She enjoyed walking, exploring the cities and bringing home gifts for her many grandchildren. Nancye loved to make good friends and be with people. Her warmth and genuine interest in others always came through.

Gatherings at 486 Rosedale Road with friends and family were ribald; full of amazing food at Thanksgiving, Christmas, New Year’s Day, Easter, birthdays or for any reason, really. She loved to share her food and home with others. Her legacy in this regard has been assumed by the rest of the well-fed Fitzpatrick clan – four children, twelve grandchildren, twenty great-grandchildren and perhaps expanding even further.

Jim fondly dubbed her “The Rose of Rosedale Road” and she was. Witty to the end, wry with a wink and a smile, always active either digging in her garden, mowing her lawn, preparing food, volunteering in Trenton, walking until her knees played out after 100 years; she will be dearly missed but never forgotten.

Rest in Peace Nancye – Jim is ready and waiting for you!

A service of remembrance and celebration will be held Saturday, December 10, at 11 AM in the Nassau Presbyterian Church in Princeton, New Jersey.

In lieu of flowers donations may be made to Centurion Ministries.