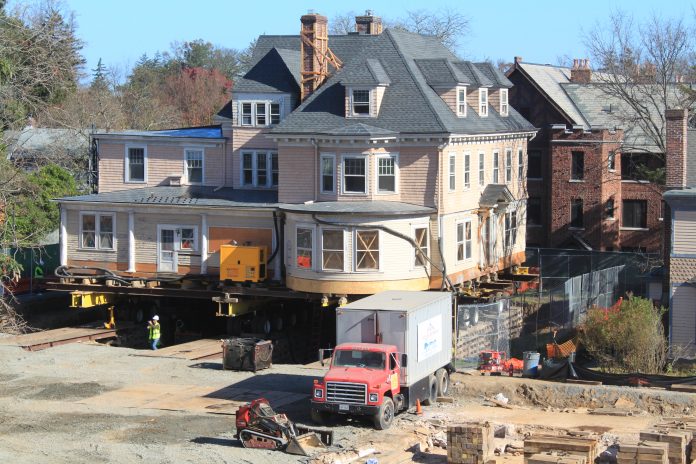 Princeton University is in the midst of its house-moving project to preserve three Victorian houses.

Crews are set to pick up the Court Club building and move it to the lot formerly occupied by the house at 110 Prospect Ave. All of the affected buildings are owned by Princeton University.

The three Victorian houses had been threatened with demolition to make room for the former Court Club building, which officials said is standing in the way of the university’s planned Environmental Studies and School of Engineering and Applied Sciences (ES+SEAS) complex.

About 3% of the ES+SEAS complex will sit on land occupied by the Court Club building. Instead of demolishing the Court Club, which houses the office of the Dean of Research, the university had planned to move it across the street.

But historic preservationists objected to Princeton University’s plan to demolish the Victorian houses at 110-116 Prospect Ave. in an online petition signed by more than 1,700 people. The petition began circulating after the university submitted a minor site plan application to the Princeton Planning Board that would have required the demolition to create space for the Court Club.

Princeton University supported the proposed Prospect Avenue Historic District, which became the town’s 22nd historic district earlier this year. It includes the 15 undergraduate eating clubs – 11 of which are still used for that purpose – that line both sides of Prospect Avenue. It also includes the three Victorian houses and the Court Club building.

The eating clubs, which are not part of Princeton University, originated in the 1800s to meet the students’ needs for food and social activities. Their function is similar to the Greek fraternities and sororities on many college campuses.

The district also includes the Ferris Thompson Wall and gateway, which led to the former athletic fields on the same side as the Victorian houses. The fields have been redeveloped for other uses by Princeton University.