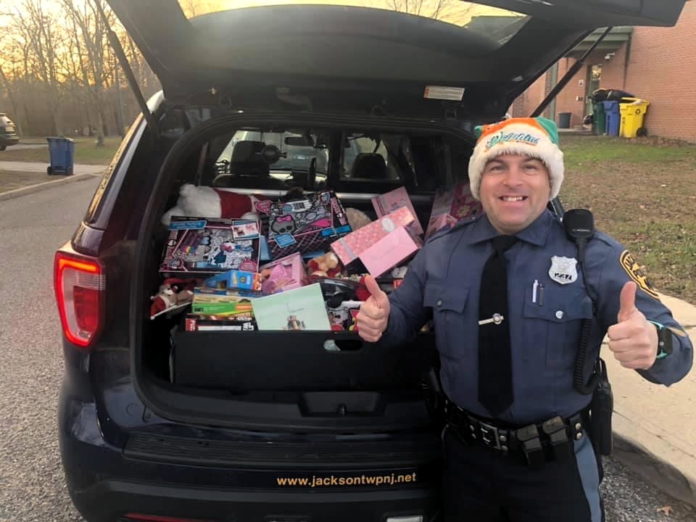 JACKSON — A long-running tradition, the annual Jackson Police and Fire Fill-A-Truck Toy Drive is one of the most anticipated events of the holiday season, bringing together first responders and members of the community to ensure that every family has the ability to provide gifts for their children.

During the past three decades, the annual toy drive has become a shared holiday tradition among the community’s first responders.

“We call it the police and fire toy drive because the fire companies are instrumental as well,” said Jackson Police Capt. Mary Nelson, adding, “We should have some elves running around, the Grinch will show up again and we generally have surprises throughout the event.”

The 2022 toy drive will be held on Dec. 10 from 11 a.m. to 5 p.m. at the ShopRite plaza, North County Line Road. Donations of unwrapped toys, children’s clothing and canned foods will be gratefully accepted from anyone who is willing to assist in the effort.

The festive event will include an appearance by Santa Claus, who will pose for photos and spread holiday cheer from noon to 1:45 p.m.

Donations of toys, children’s clothing and canned foods may also be dropped off at local firehouses, police headquarters and the municipal building.

Nelson said she, Officer Derek Gorski and Officer Lou Notare are the primary coordinators of the toy drive, with assistance from Sgt. Mike Grochowski.

“We have high school kids from the honor society, police officers who bring their children to help out, Boy Scouts and Girl Scouts, and family members,” she said.

Families who would like to receive donations from the toy drive may pick up an application now at the Watch Commander window at the Jackson Police Department, Nelson said.

For an electronic copy of the application which would be sent via email, send an email to toydrive@jacksontwpnj.net

“People are asked to fill out a form that tells us how many children they have and the ages of the children so we get a thorough count.

“We like to know our general age groups because teenagers tend to get overlooked so our PBA gift list includes a cash donation.

“I shop for the girls and the PBA makes a generous donation that allows the (toy drive’s) coordinators to shop for the teens,” Nelson said.

This year a room will be set up where people who have requested toys for their children can select an appropriate toy.

“We shop for close to 200 children who receive gifts,” Nelson said.

The Fill-A-Truck toy drive had its beginnings in a chance exchange between a Jackson police officer and a young student, according to Sgt. Ed Bennett, now retired.

“I was teaching the DARE (Drug Abuse Resistance Education) program to help kids deal with peer pressure and to not start drug use. There are programs at the McAuliffe and  Goetz middle schools,” he explained.

“At Christmas time my wife and I put together little bags with candy, erasers and some DARE literature. We did that every Christmas, usually on the last day of DARE (instruction) before the Christmas vacation.

“On the way out I would hand a bag to each student, I had 600 students. I wished them a Merry Christmas and talked to them. You want them to become friendly with you so they are not afraid of police officers,” Bennett said.

“I would ask them, ‘What are you doing for Christmas?’ And the kid would say, ‘We are spending it at home, mom and dad put up the Christmas tree’ or ‘I’m going to my grandmother’s house, or ‘We are going to Florida.’

“And one little boy said, ‘We are not celebrating Christmas.’ I looked at him and I said, ‘Your family doesn’t celebrate Christmas?’ He said, ‘No, I live with my grandma and we can’t afford Christmas.’

“You have to realize I’m on top of the world and Christmas vacation is coming up and all these kids are so happy and I get this one little boy. It wasn’t that he was sad, it was almost like it was a normal thing for him,” Bennett explained.

“I have been blessed with my career, my family, my life and I just have to give back a little bit. Every holiday I would go to my squad and we would collect money and we would give families dinners.

“So I asked him again, ‘Your family doesn’t celebrate Christmas?’ He answered, ‘We don’t have anything, we can’t afford Christmas.’

“I gave him the gift bag and he went on his way. I went to my squad and told them the story and I went to the guidance counselor and told her the story and between my people at the police department and the school we were able to get a Christmas tree, Christmas dinner and enough gifts for the entire family,” he said.

“That is how the toy drive started, it was one little boy in town, it was 1991 and that was the start of it, it was a small, humble beginning. And again, I was blessed to have a group of guys who were willing to do it with me.

“When I was getting ready to retire, I had a group of people, Capt. Nelson, Officer Gorski, Officer Notare, to carry on the program and keep it going.

“And they remember me each year, they keep me involved in it. I still go out there and go to the truck drive, post what I can on Facebook and let everybody know,” Bennett said.

“We made it a group project everybody was involved in and it still is to this day. When I started we were collecting a couple of dollars from each guy and buying toys.

“Now we fill up the truck, we have Santa come and when you look around at the news and everything going on in the world and you look at something like this, it’s like, ‘Wow! The majority of people are good.’

“We have something that has gotten pretty big and you know what? When I look back on my career this is one of the things I am most proud of,” Bennett said.

“It has gotten so big at this point that on the day of the giveaway we have officers, we have families coming out to help with everything, stacking the toys and giving out the toys. It has become a community project and it all goes back to that one little boy,” he said.