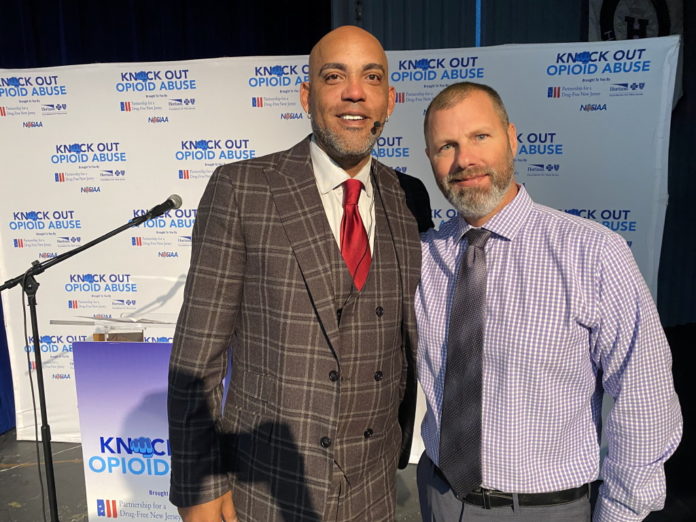 A former NFL quarterback who became addicted to opioid painkillers told student-athletes at Howell High School to be aware of the long-term problems such drugs can cause.

Ray Lucas, who played college football at Rutgers University before playing for seven seasons in the National Football League with the New York Jets, New England Patriots and Miami Dolphins, was a presenter during the “Knock Out Opioid Abuse” program at the high school on Nov. 16.

The presentation was sponsored by the Partnership for a Drug-Free New Jersey and Horizon Blue Cross Blue Shield of New Jersey in collaboration with the New Jersey State Interscholastic Athletic Association. A total of 10 presentations will be held in New Jersey through the end of the current school year, according to the sponsors.

More than 100 students gathered in the auditorium to listen to Lucas discuss his playing career and the significant problems he encountered after he began using opioids.

Opioids are a class of drugs that include the illegal drug heroin, synthetic opioids such as fentanyl, and pain relievers available legally by prescription, such as oxycodone (OxyContin), hydrocodone (Vicodin), codeine, morphine and many others, according to the National Institute on Drug Abuse. Opioids are used to treat moderate to severe pain.

“Student-athletes have an elevated risk of opioid use as sports injuries send more than 2.6 million children to emergency rooms every year,” according to the Centers for Disease Control and Prevention.

During his playing career, Lucas sustained numerous injuries which resulted in several surgeries. His first injury in an NFL game was a severe concussion, although he played the rest of the game after sustaining the injury. Other injuries followed during his career, which lasted from 1996 to 2002.

Lucas described how at one point he sneezed and lost feeling in his body from the waist down. He retired shortly thereafter and eventually underwent back surgery.

He told the students how he became dependent on prescription opioids and how, at one point, he was taking more than 1,400 pills a month.

Lucas said that before playing in the NFL, he had no addiction to medication and four pills would help him, if needed.

Lucas said he realized he had a problem when his wife told him, “You go to rehab or we leave you.” After hearing that ultimatum, he said, he sought treatment for his addiction.

He said that during his rehabilitation, his friends and family members were his biggest supporters.

Lucas said his goal in speaking about what he experienced is to help student-athletes avoid becoming addicted to opioids.

In 2016, Pearson and others at Horizon Blue Cross Blue Shield of New Jersey realized opioid abuse was a national issue.

In 2017, Horizon Blue Cross Blue Shield of New Jersey teamed up with the Partnership for a Drug-Free New Jersey. Both organizations want to engage residents and help families that are experiencing a crisis.

“We went county by county to see what was missing and how we could help. (Both organizations) offer a lot of exciting programs and can see people making a difference,” said Angelo Valente, executive director of the Partnership for a Drug-Free New Jersey.

Lucas has been a guest speaker with “Knock Out Opioid Abuse” for more than two years and said he hopes to continue playing a role in helping to save people’s lives.

“We want to make sure student-athletes make good choices. Our website has tools and resources as well as opportunities to engage in the community,” Pearson said.