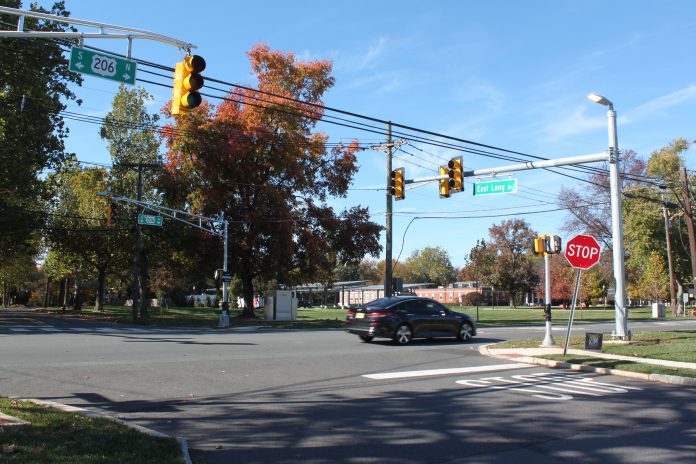 The new traffic signal at the intersection of Route 206, West Long Drive and East Long Drive was activated earlier this month.

The traffic signal was installed several weeks ago and began test-blinking yellow on Route 206 and red on West Long Drive and East Long Drive. It is now fully operational – red, yellow and green.

West Long Drive is the road into the Long Acres single-family home neighborhood, next to the Lawrence Township Municipal Complex.

The installation of a traffic signal at the new East Long Drive entrance into the Venue at Cobblestone Creek development was raised during the Lawrence Township Planning Board’s public hearing on the application in 2016. The site plan for the new development called for creating a new street – East Long Drive – to line up opposite West Long Drive.

In making the case for a new traffic signal, Lawrence Township officials told the New Jersey Department of Transportation that a traffic signal was needed for the safety of the residents and the general public. It would also improve the traffic flow along that section of Route 206.

Lawrence Township hired consultant Arora and Associates to conduct a traffic study and warrant analysis to determine whether the intersection met the standards for a traffic light. The report was submitted to the New Jersey Department of Transportation, which approved the request.

Lawrence Township contributed 25% toward the cost of the new traffic light and it is paying for the electricity to operate it. The New Jersey Department of Transportation picked up the tab to install it and will maintain it, officials said.