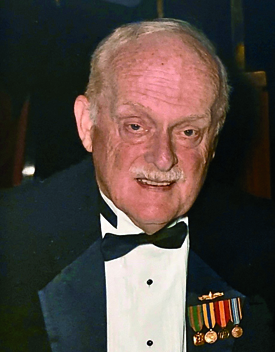 Garrick was born in Norwich, NY, and raised in nearby New Berlin, NY. He attended Northwood School and graduated from Colgate University. Upon graduation, Garrick attended Officer Candidate School and was commissioned as an officer in the United States Navy.

He met the love of his life, Lynn McNamara, on a blind date, and they married in 1961. After serving aboard the USS Monrovia, Garrick pursued his love of languages and began work with the Naval Security Group. Garrick and his family were stationed around the world. Highlighted duty stations to which they were assigned included Glasgow, Scotland, Puerto Rico, Midway Island, and Cheltenham, England. During his time in the Navy, Garrick also earned a Masters in American Foreign Policy from Troy State University.

Garrick retired from the Navy after 20 years of service, and he and Lynn bought their dream home, a 115-acre former farmstead in Gilbertsville, NY, named Locust Knoll. Garrick continued to serve his community as a member of Rotary International, Clerk of the School Board, Vestry member and Warden at Christ Church Gilbertsville, facilitator at Christ Church’s Saint Afterschool program, volunteer mediator for the family court, and on the American Red Cross Disaster Action Team.

While serving with the Red Cross, Garrick responded to disasters locally and nationally, including several major hurricanes, and assisted with public affairs and volunteer coordination. Garrick was a “second responder” providing food and aid to recovery workers at Ground Zero following the destruction of the World Trade Center on September 11, 2001. In 2016, Garrick was recognized for his Outstanding Contributions to the Community by NY State Senator Boehlert.

Garrick and Lynn continued to travel during their retirement, enjoying trips to Ireland, Alaska, Canada, and Bermuda. Second only to Locust Knoll, they loved their summer cottage, “DotSea,” in Georgetown, Maine. For many years they spent a good portion of the summer enjoying the crashing waves, lobster, and time with family.

Garrick also deeply loved music and lent his voice to the choirs of St. Andrew’s Episcopal Church and Christ Church, barbershop quartets and choruses, and the Catskill Choral Society for many years, as well as the Applewood Chorus.

In lieu of flowers, Garrick requested donations be directed to Building Crossroads
( www.stpetersfreehold.org/crossroads with a memo to Garrick Hoadley Memorial Fund )
or the American Red Cross. Funeral services were held at St. Peter’s Church, Freehold, NJ. Interment will be at St. Andrew’s Church, New Berlin, NY, at a later date.