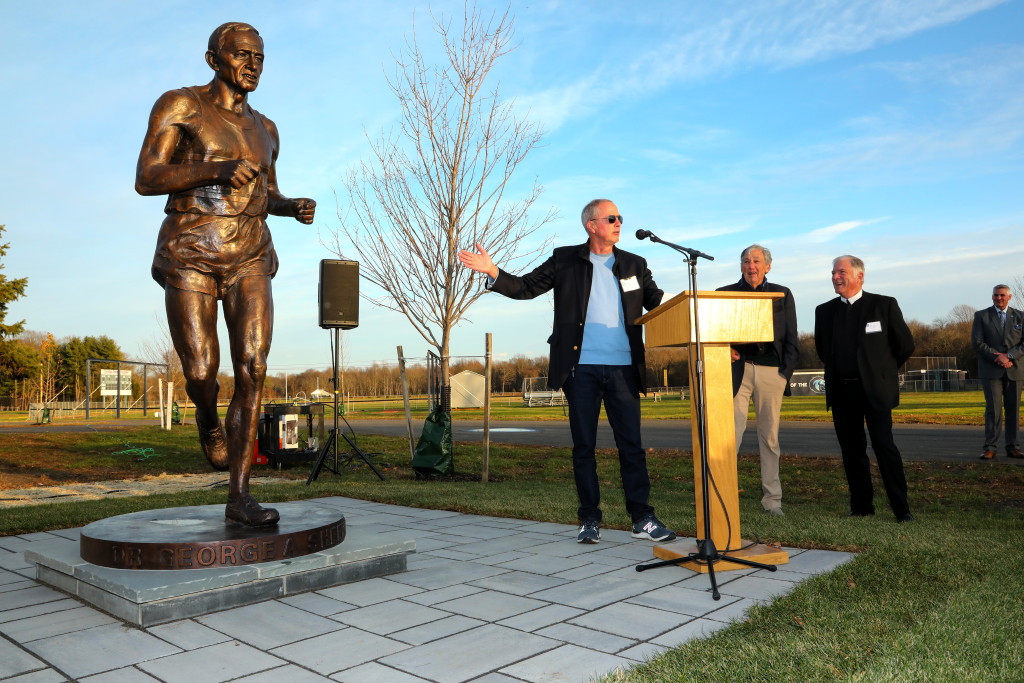 More than 60 years ago, Dr. George Sheehan believed in a vision for an all-boys Catholic preparatory school in Monmouth County.

Together with Peter Fleming and John Henderson, the trio founded Christian Brothers
Academy in Lincroft with help from the Brothers of the Christian Schools, according to a press release from CBA.

A nationally competitive running program soon followed thanks to Sheehan and on
Dec. 4 his impact on CBA and the running tradition was symbolized with a larger-
than-life statue on campus.

The new Dr. George Sheehan statue is a gift from his family as part of the nearly
completed Sheehan Track and Field Complex. The statue sits at the base of the access road
that leads to the new facility, allowing all who pass through campus to see it.

Perhaps even more symbolically, the statue is just a few dozen yards away from the starting line of the cross country course that loops through the CBA grounds.

“As we get closer to finishing our new state-of-the-art track that bears the name of Dr.
Sheehan, it is altogether fitting that we honor him with this statue,” CBA President Ross Fales said to the audience. “This statue will immortalize his founding contribution to CBA and serve as an inspiration to our runners and other athletes.”

Created by sculptor Brian Hanlon, the Sheehan statue shows the CBA co-founder in his
classic Manhattan Jaspers running singlet. Sheehan was a standout track runner at Manhattan College – also operated by the Brothers – before cementing his roots in
Monmouth County, according to the press release.

In 1962, the academy cleared an area on its 157-acre campus to create a competition field
for the track team. Officially, it was named after Sheehan, who had emerged as a leading
voice in the running community and a visionary for the young program at CBA.

Years after his college days, he began to run intervals in the historic Round Barn with the
CBA runners, and ultimately, completed multiple Boston Marathons and clocked the world’s first sub-five-minute mile by a 50-year-old.

As a profession, Sheehan was a noted cardiologist, but he soon became a best-selling author in connection with the running and fitness movement that took off in the 1970s.

At the unveiling of the statue, Sheehan’s sons spoke to those in attendance about the impact their father had on them and CBA.

“CBA was sacred ground to my dad and continues to be for our family,” said Tim Sheehan.

Fast forward to 2022, the CBA Colts have well over 100 state championships between cross
country and track and field. Sheehan’s family remains active in the CBA community, with one of his great-grandsons, Andrew Chiles, currently attending the academy.

Chiles addressed the audience just before the statue was unveiled and said, “In my almost four years here at CBA, I have had the pleasure of living out his legacy firsthand. He firmly believed that through running, and any sport, we can find our best self. By enduring the day-to-day struggle and working hard to accomplish my goals, CBA has truly made me a happier person.”

The Sheehan Track and Field Complex is scheduled to open in the spring of 2023 in time for the outdoor track season, according to the press release.