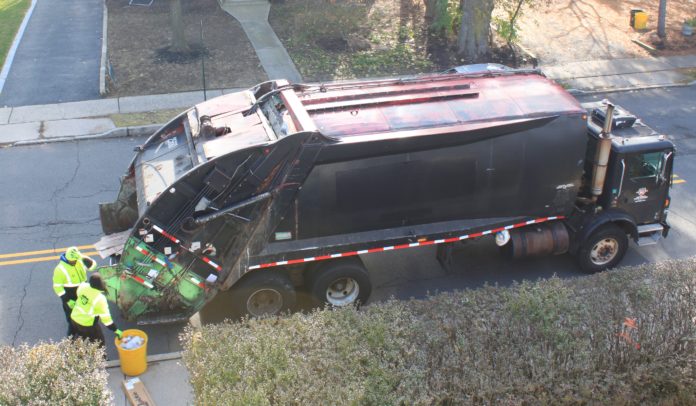 The new contract, however, does not include an organics or food waste collection component, which was one of the options when the town initially sought bids.

The new contract seeks to contain costs, officials said. The cost of new trash-hauling contracts has increased by 45% to as much as 150% in other towns. The COVID-19 pandemic, labor shortages and increases in fuel costs have contributed to the price hikes, they said.

Interstate Waste Services will provide each household with a 64-gallon trash cart. Additional trash carts may be leased from the trash collection company for an “as-yet undetermined” fee. Smaller trash carts will be available for households that do not require the larger cart.

The new carts are expected to be delivered to households in January, in advance of the start of the new collection system. Residents’ old trash cans, bins and receptacles will be picked up by the hauler for disposal during a specific time after Feb. 1.

Trash will be collected on the same schedule that is in place now. It is collected once a week on Monday, Tuesday, Thursday or Friday. The town is divided into zones for trash collection, with a specific day in each zone.

The contract provides for a combination of automated and semi-automated collection systems. The trash collection truck is fitted with a mechanical arm operated by the driver. The mechanical arm picks up the trash cart and dumps the contents into the truck.

In neighborhoods where cars are not parked on the street, the truck would be staffed by only a driver. The driver would operate the mechanical arm from the truck to pick up the trash cart and empty its contents into the truck.

In some neighborhoods where cars are parked on the street, it would be a semi-automated system. The truck would be staffed by a driver and a worker, who would get out of the trash collection truck to roll the trash cart over to the mechanical arm.

Under the new contract, residents who have bulky items to dispose of, such as furniture and mattresses, must make a reservation for an Interstate Waste Services truck to collect them. Residents may no longer put out bulk items on trash collection day without making a reservation in advance.

Princeton Councilman David Cohen acknowledged that the new contract contains significant changes – from distributing one 64-gallon trash cart per dwelling unit to scheduling bulk pickup so the trash trucks do not drive around town, looking for bulky items on the curb.

“The costs have gone up dramatically. Princeton has always had a ‘Cadillac’ system (of trash collection). If we want to avoid doubling our costs for trash collection, we had to make some choices – maybe not go to a Chevy Nova, but somewhere in between a Cadillac and a Chevy Nova,” Cohen said.

The councilman emphasized “how much of it is a sustainability issue” when commenting on leasing a second 64-gallon trash cart if one is not enough.

Residents have choices and control over how much waste they generate, such as how much plastics they buy and whether they engage in composting in the back yard, Cohen said.

“It’s not just an economic thing, it’s a sustainability thing. The extra fee for another cart is ‘pay as you throw.’ It incentivizes better decision-making by residents,” he said.

“We are not abandoning it. We are still very committed to having composting for as many, if not all of our residents, as soon as possible,” Sacks said.